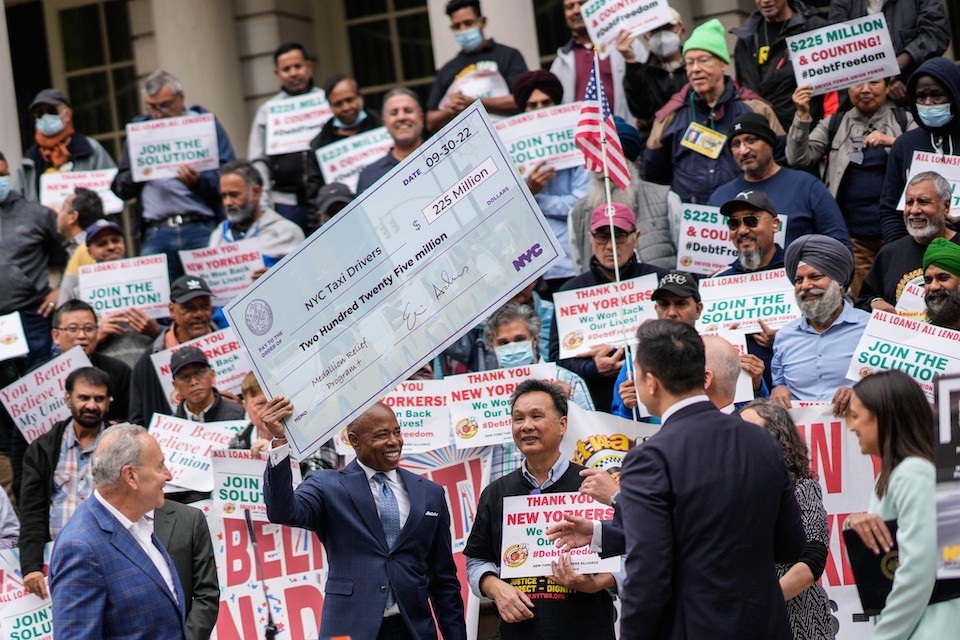 “Yellow cabs are New York City icons, right alongside the Empire State Building and the Statue of Liberty, but in recent years, our taxi medallion owners and drivers have been burdened by crippling debt that has crushed people who only wanted to pursue the American Dream,” said Mayor Adams. “I am proud to announce that as of today, more than 1,000 medallion owners have closed on loans, resulting in over $225 million of taxi medallion debt relief and counting. MRP+ puts money back in the pockets of medallion owners and drivers — many of whom are immigrants — working around the clock to keep New Yorkers on the move and put food on their family’s table. This debt relief program means they no longer have to max out their credit cards, lose their homes, or be unable to pay for their children’s college education.”

“Today's achievement signals financial certainty in what has been a critically fragile market for medallion owners and taxi drivers,” said Deputy Mayor for Operations Meera Joshi. "Taxi drivers are the backbone for our city and the industry is critical to our transportation network, but for so long our driver owners have faced crippling debt. Today starts a new chapter of repair and rebirth for the industry."

“After striking a deal to get medallion owners the relief they desperately need, we finally have a program in place that is very quickly providing substantial amounts of debt forgiveness,” said TLC Chair and Commissioner Do. “I am incredibly thankful for all of the hard work done by the TLC, our partner agencies, Marblegate, and NYTWA, and I am looking forward to seeing the positive impacts that this program will have on the lives of medallion owners and the health of the taxi industry.”

“I am proud to have worked hand-in-hand with New York Taxi Workers Alliance, Mayors Adams and de Blasio, local elected officials, and a city-wide movement of New Yorkers to broker a deal with City Hall to provide life-saving debt relief for cab drivers,” said U.S. Senator Charles Schumer. “The medallion debt crisis has gone on for years—taking lives and livelihoods. I commend Mayor Adams, NYTWA, TLC, and Marblegate for working assiduously to enact the deal we reached last fall and providing critical debt relief for over 1,000 medallion owners thus far with more to come. Together, we are working to bring this ongoing situation to a just resolution for the cabbies who work every day to serve this city.”

The debt relief part of these deals are subject to the agreement reached by the city, TLC, Marblegate, and NYTWA to restructure outstanding loans of eligible taxi medallion owners to a maximum principal balance of $170,000, after the application of a $30,000 grant that will be used as a down payment on the restructured loans. The restructured loans will also be guaranteed by a loan loss reserve fund. The final terms for the restructured Marblegate loans will include an interest rate of 7.3 percent or less, fully amortized over no more than 25 years — capping monthly payments at $1,234. Borrowers with lower loan balances are also eligible to participate in the program.

Medallion owners are encouraged to sign up for free legal representation and financial counseling through TLC’s Owner/Driver Resource Center . Other lenders that would like to learn more should also visit the resource center.