Opinion: Ex-VP Robredo's Stay at Harvard is Good for Her Country By Manuel L. Caballero 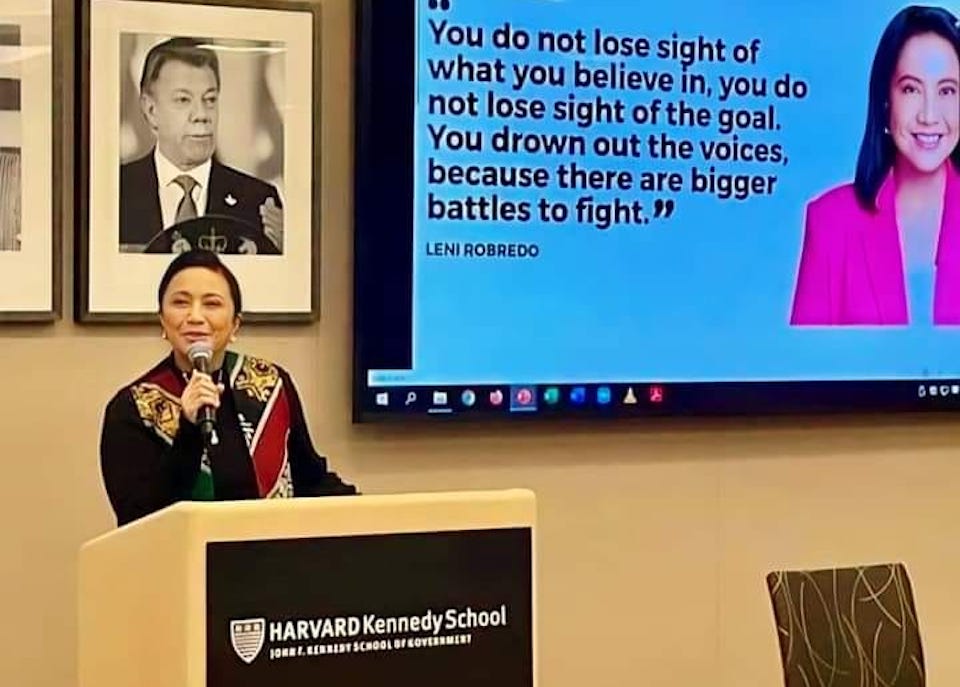 EX-VP ROBREDO'S STAY AT HARVARD IS GOOD FOR HER COUNTRY

It is our view that former VP Leni Gerona Robredo's exposure outside the dirty and corrupt Philippine politics as a resource speaker at Harvard University is good not only for herself and her children, but for her country as well. She is helping regain the good name and glory of the PH in the international arena which sank to the gutter  during the six Duterte years of EJK, like the Marcos 20 years of brutality, corruption and extravagance. At the same time, she is meeting outstanding individuals in their respective fields and developing a reputation towards becoming a respected international figure.

In her first week at Harvard University, she has met her fellow distinguished Hauser speakers as well as Filipino students in that prestigious school.

Atty. Robredo was welcomed to Harvard by the University Marshal.

She also had a meeting with Singapore's Ambassador at Large with whom Mrs. Robredo reportedly discussed global issues like Russia's cruel war against Ukraine and the US-China competition.

She also met the ex-vice president of Ecuador last week.

In the coming weeks, as she performs her task at Harvard, the ex-VP will be exposed to more global issues and will meet more honorable personalities.

The Asia Society Switzerland has invited Atty. Robredo to speak from Zurich next month in a global forum on the "State of Asia" where she is expected to speak on the dysfunctional role of disinformation.

Not too long ago, the ex-VP spoke about the PH commitment to democracy, rule of law and human rights at the Center for Strategic and International Studies, a top policy think tank in Washington D.C.

I was present in that meeting. I recall that as the then Vice President was introduced, someone in the audience yelled "Mabuhay ang Pilipinas!" I told myself then, this VP is doing good for the Philippines.