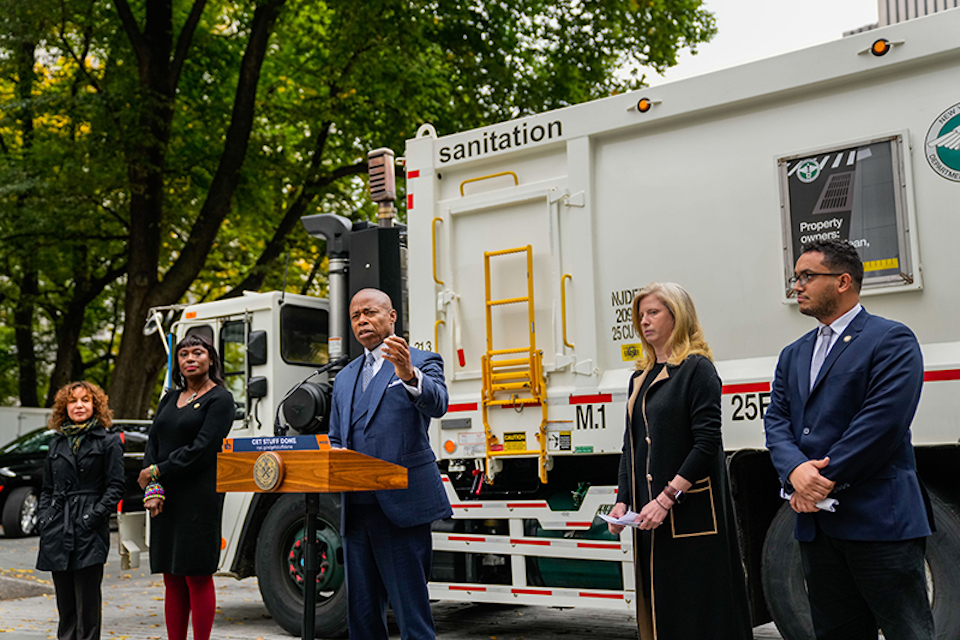 New York – As part of the Adams administration's ongoing commitment to cleaning up New York City's streets and strengthening the city's economic recovery, New York City Mayor Eric Adams and the New York City Department of Sanitation (DSNY) on Monday, 17 October 2022 announced the opening of the public comment period for new proposed rules, reducing the number of hours trash and recycling will sit on New York City sidewalks by adjusting the time of day trash may be placed on the curb. Currently, trash and recycling may be placed on the curb after 4:00 PM the night before collection – the earliest of any major American city – meaning that in many neighborhoods these items can sit out for more than 14 hours, including during the evening pedestrian rush hour. These new rules would decrease the amount of time trash is left on the curb, diminishing the eyesore of black bags, reducing trash for rats, and improving cleanliness – and ultimately boosting the city's recovery.

"Bags of trash sitting on the curb for hours have hurt our city's recovery for too long and is one of the most indelible images of New York, but, today, we're saying enough is enough by making a generations-overdue change that will have a real impact on the cleanliness of our streets," said Mayor Adams. "By drastically reducing the amount of time that black bags can sit on our curb, we're not just catching up with other cities but surpassing them and leading the nation again. This announcement will keep our streets clean, it will discourage rats from running their own version of Open Restaurants, and it will mean no more tripping over black garbage bags at rush hour. We're not going to let New Yorkers be plagued by rats – we're going to keep our city squeaky clean."

"This announcement shows just how much is possible when we bring everyone to the table," said Chief Advisor Ingrid Lewis-Martin. "I'm grateful to 32BJ, REBNY, and Teamsters Local 831 for coming together with this administration to deliver a win for millions of New Yorkers and help build a cleaner, more welcoming city for all."

"Rush hour shouldn't also be trash hour. By reducing the hours trash is allowed to sit on our streets, we are giving New Yorkers back their sidewalks," said Deputy Mayor for Operations Meera Joshi. "New Yorkers will see and smell the difference, and rats will be cut off from their all-you-can-eat buffet."

"The time to do this was really in the 1970s when the city banned residential incinerators and created the modern black bag regime, but the second-best time is right now, when our city's recovery hangs in the balance," said DSNY Commissioner Jessica Tisch. "New Yorkers want the streets cleaned up, and seeing the bags for a few hours a day instead of more than half the day will make a huge, huge difference."

Under the new rules, slated to go into effect on April 1, 2023, residential buildings would have up to three options, each of which would substantially decrease the amount of time trash is on the curb:

Taken together, this means trash will sit on the curb for a fraction of the time it does currently. These rules would apply to recycling and curbside composting as well.

This announcement also includes new clarified rules for commercial establishments, which do not receive service from DSNY but rather from private waste haulers. Businesses may engage in one of the following options:

In addition to these new proposed rules, DSNY is doing more of its collection on the midnight shift than pre-pandemic, further reducing the amount of time trash sits on the street. Overnight collection now accounts for approximately one quarter of all collection operations – roughly 5 million pounds per night.