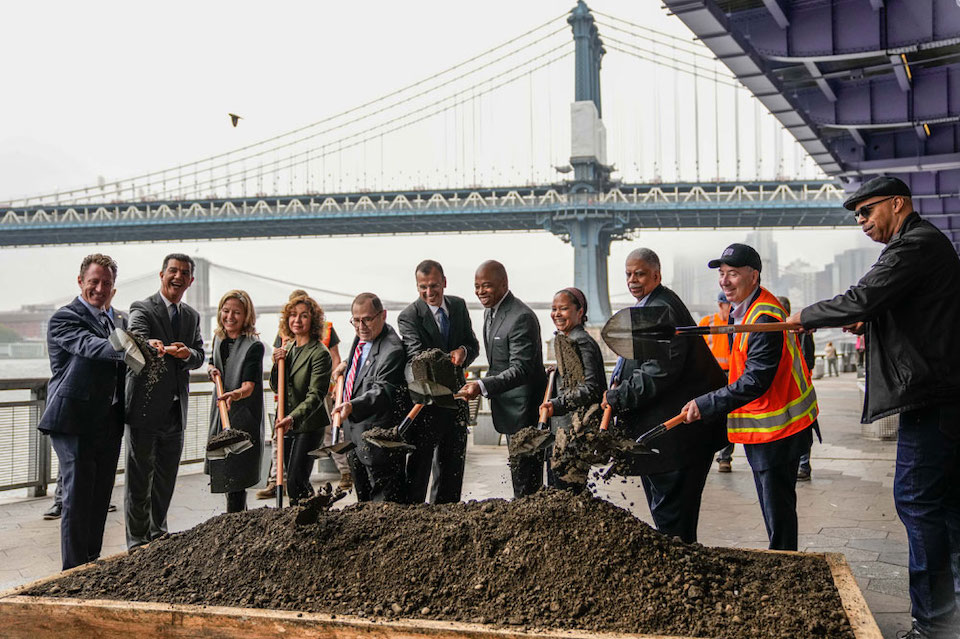 NEW YORK – New York City Mayor Eric Adams on Wednesday 26 October, marked the upcoming 10-year anniversary of Superstorm Sandy by taking a number of critical steps to build the long-term resilience of New York City. First, Mayor Adams broke ground on the Brooklyn Bridge-Montgomery Coastal Resilience (BMCR) project, which will install a combination of flood walls and deployable flip-up barriers to protect the Two Bridges neighborhood of Manhattan from a 100-year coastal storm surge, accounting for sea level rise expected by 2050, while also maintaining access and visibility to the waterfront.

Additionally, the Adams administration announced a new program — Climate Strong Communities (CSC) — as part of the city’s strategic climate strategy. A central initiative of AdaptNYC, CSC is a community engagement and project development program that will help create the next pipeline of resiliency projects that target multiple types of hazards. It will focus on neighborhoods that did not benefit from existing or planned Sandy recovery projects.

“Ten years ago, flooded subways, a weeklong blackout downtown, billions in property damage, and 44 of our neighbors killed tragically showed what climate change can do to our city,” said Mayor Adams. “Sandy wasn’t just a storm; it was a warning. Another storm could hit our city at any time and that is why our administration is doing everything we can to prepare and protect New Yorkers. We have embarked on the some of the largest urban climate adaptation projects in the county, with initiatives like the Brooklyn Bridge-Montgomery Coastal Resilience project and Climate Strong Communities. New York City’s infrastructure projects are more complex, novel, and unparalleled compared to any other American city, but many remain in various stages of completion, and we need our partners in the federal government to help provide us with regular and reliable resiliency funding of approximately $8.5 billion. We must continue to act quickly to bolster our defenses, prevent damage, and save lives.”

Superstorm Sandy measured 1,000 miles wide and took a rare westward hook that put New York City in the path of its onshore wind. It made a historic impact on the city, making landfall on October 29, 2012. With a wind field three times the size of Hurricane Katrina, Superstorm Sandy resulted in the deaths of 44 New Yorkers, flooded 51 miles (71 percent) of city land, left 2.5 million residents without power, resulted in $19 billion in damages and lost economic activity, rendered 35,000 residents temporarily or permanently displaced, and caused damage to more than 9,100 homes.

BMCR will reduce flooding risk — from both sea level rise and storm surge — for more than 44,000 New Yorkers, including many living in affordable housing, while continuing to preserve views and access to the waterfront. The deployable barriers will be permanent infrastructure, hidden until they are flipped up in the event of a storm. The location of the flood walls and posts has been designed to minimize conflict with subsurface infrastructure and to maximize integration of public space amenities, such as open-air seating, fitness equipment, and athletic courts.

CSC will be centered around environmental justice communities that have been left unaddressed by Sandy-recovery funding and that historically face deeper impacts as a result of climate change. The city will create and invest in this program with the hopes of unlocking billions of additional dollars in federal funds through the Inflation Reduction Act and the Infrastructure Investment and Jobs Act. The program will work to create model projects to address various climate risks, like coastal flooding, sea level rise, extreme rain, and heat in city neighborhoods that, for far too long, have been overlooked. CSC is a transformative opportunity to deliver unprecedented federal dollars, facilitate economic development, create more resilient affordable housing, and cement New York City as a leader in climate adaptation.

Call for Federal Government to Provide $8.5 Billion in Funding for Pre-Disaster Mitigation

Since Superstorm Sandy struck, an entirely new class of infrastructure has been created to bolster protection for waterfront neighborhoods from devastating storm surge and regular tidal flooding. These infrastructure projects — such as the East Side Coastal Resiliency Project — are complex, novel, and unparalleled in any other American city. A majority of these projects, however, remain in various stages of completion.

The Adams administration is therefore calling on the federal government to create a new and consistent infrastructure funding program that would enable New York City, and other jurisdictions around the country, to complete a suite of critical coastal resiliency projects. Many of these projects listed above — which are large and complex — are the first of their kind in New York City, and are being implemented in a unique, dense urban environment. These projects — aimed at increasing protection against coastal storms that can damage waterfront areas and infrastructure — are either currently in construction, in design, or in the planning phase.

In order to maximize the impact of federal funds, Mayor Adams also laid out several important federal policy reforms to ensure the city is better prepared for future storms. These policy reforms include:

In addition, Mayor Adams highlighted several steps the city is taking to fast-track capital projects, as well as a comprehensive effort to reform the capital project process. Earlier this month, the New York City Capital Process Reform Task Force released more than a dozen initial recommendations that would speed the completion of major projects citywide. The Task Force was convened by First Deputy Mayor Lorraine Grillo.

In recognition that several construction projects need faster groundbreakings and completions, Mayor Adams also today pledged to work with state lawmakers to pass legislation that would empower the city to use progressive design-build. State law currently requires a two-step procurement process: One step for a request for qualifications and another for a request for proposals. With the passage of progressive design-build, the city can quickly select a vendor before the full scope of the project has been established. This would facilitate early-stage collaboration to investigate existing conditions, examine engineering and construction challenges, and agree on solutions before determining a final scope and price. Further, it would result in fewer disruptions for residents, fewer changes for contractors while projects are underway, money spent more efficiently, and better projects for New Yorkers.