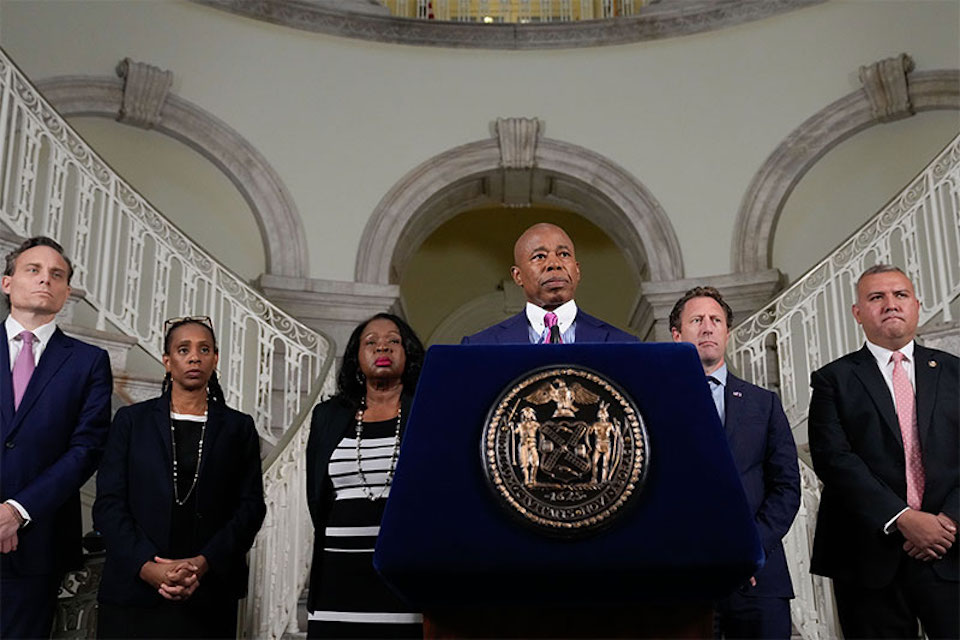 NEW YORK – As New York City anticipates surpassing the highest recorded shelter census in recorded history today, New York City Mayor Eric Adams issued Emergency Executive Order 224, formally directing all relevant city agencies to coordinate their efforts to respond to the asylum seeker humanitarian crisis and construct the city’s Humanitarian Emergency Response and Relief Centers. In an address, Mayor Adams also called for emergency federal and state aid to handle the continued influx of asylum seekers as the city projects costs of more than $1 billion related to asylum seekers in this fiscal year alone, as well as expedited work permits, a national decompression strategy, and a resettlement strategy. With more than 17,000 asylum seekers bussed to the city since the spring, the Adams administration estimates that once the asylum seekers from today’s buses are provided shelter, the city will surpass the highest number of people in recorded history in its shelter system. And every day going forward, where more are added this count, another record will be broken. If the pace continues, the city’s shelter census will surpass 100,000 in the coming year.

Since this humanitarian crisis began, the city has, largely on its own, taken fast and urgent action, managing the arrival of a rapidly increasing number of buses across New York City with virtually no coordination from states sending them; opening 42 hotels as emergency shelters; standing up a navigation center to connect asylum seekers with critical resources; enrolling over 5,500 children in public schools through Project Open Arms; and more. The city is opening at least one Humanitarian Emergency Response and Relief Center to assist asylum seekers arriving with immediate needs and help them reach their final desired destination.