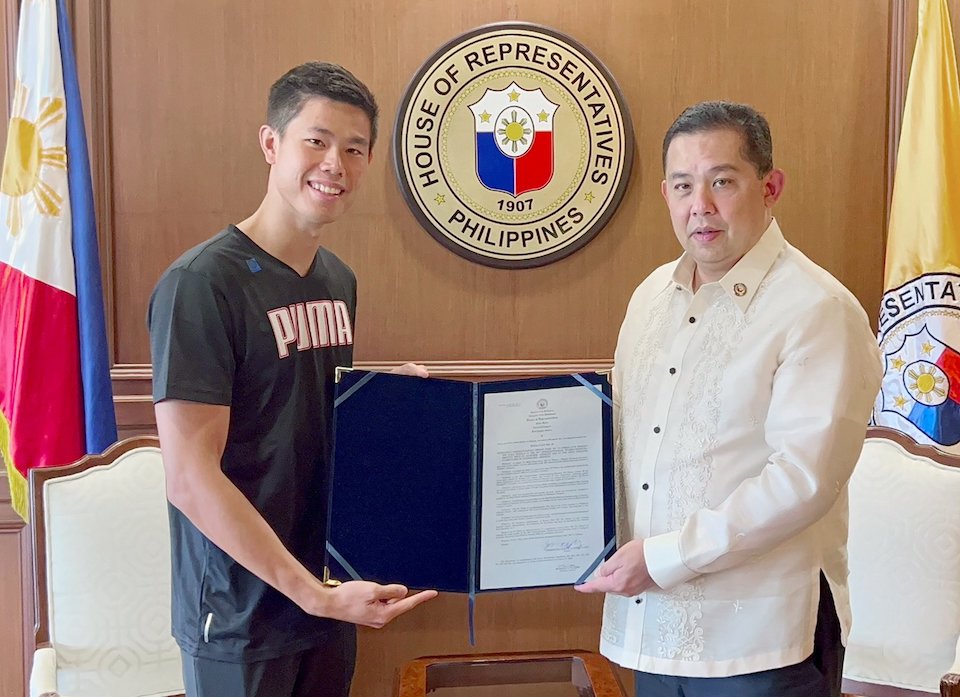 Quezon City, Philippines - Speaker Martin G. Romualdez on Tuesday presented to ace pole vaulter Ernest John “EJ” Uy Obiena a copy of the resolution unanimously adopted by the House of Representatives honoring him for bringing pride and glory to the Philippines.

The simple handover rite of House Resolution (HR) No. 10 was held at the office of Speaker Romualdez where he received Obiena’s courtesy call.

Romualdez assured Obiena that the entire House of Representatives is behind him as he embarks to compete anew on the world stage to reap more honors for the country, particularly in the forthcoming Paris 2024 Olympics.

“We’ll be rooting for you, we’ll be praying for you, and cheering for you all the way,” Romualdez told Obiena.

For his part, Obiena thanked Romualdez for the warm welcome he received, saying the expression of support of the House inspires him to strive harder for the country’s prestige.

“It’s very flattering to receive such an honor. It’s good to know that the whole House is at the back of every Filipino athlete who competes for the country,” Obiena said.

Obiena is considered a strong contender for the pole vault gold in the Paris 2024 after he managed to beat the pole vault world record holder last September 2, 2022, in the Diamond League held in Brussels, Belgium. 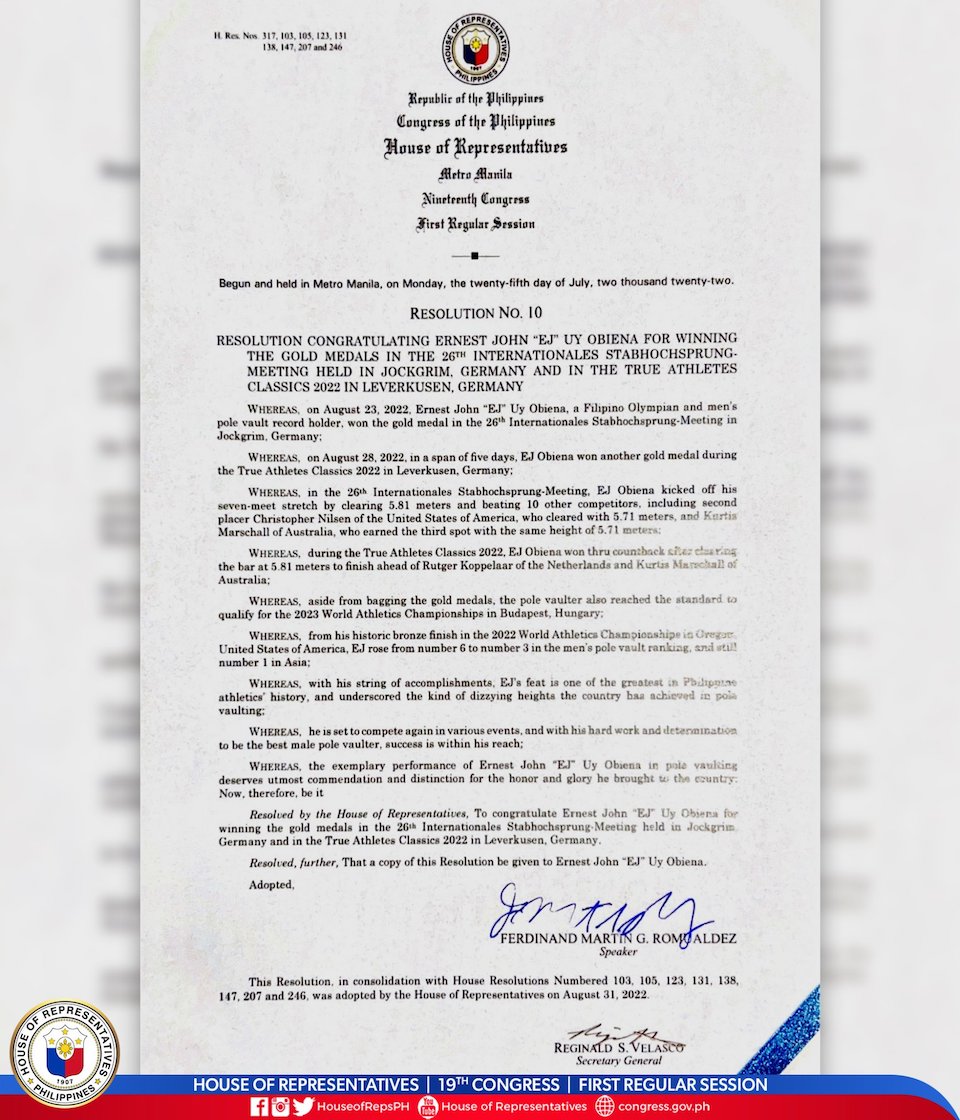 “Resolved by the House of Representatives, to congratulate Ernest John ‘EJ’ Uy Obiena for winning the gold medals in the 26th Internationales Stabhochsprung-Meeting held in Jockgrim, Germany and in the True Athletes Classics in Leverkusen, Germany. Resolved, further, that a copy of this Resolution be given to Ernest John “EJ” Uy Obiena,” the resolution reads.

The lawmakers lauded Obiena, a Filipino Olympian and Men’s Pole Vault record holder, for his remarkable contributions in bringing honor to the country, saying his exemplary performance deserves utmost commendation and distinction.

“With his string of accomplishments, EJ’s feat is one of the greatest in Philippine athletics’ history, and underscored the kind of dizzying heights the country has achieved in pole vaulting,” the resolution said.

“He is set to compete again in various events, and with his hard work and determination to be the best male pole vaulter, success is within his reach.” 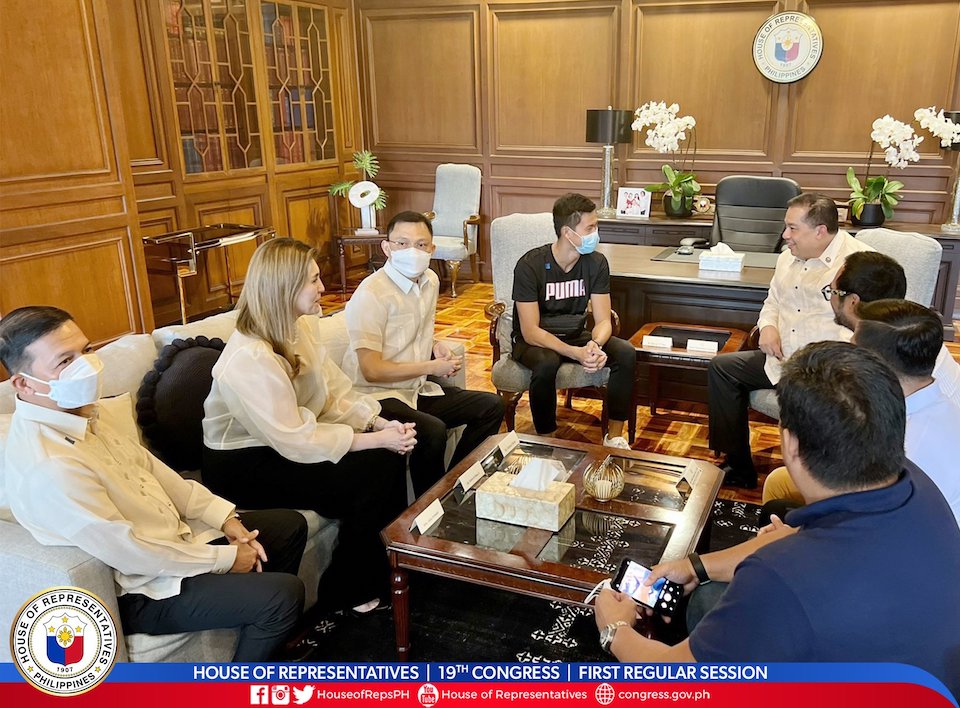 EJ Obiena plucked another gold medal during the True Athletes Classics 2022 in Leverkusen, Germany on August 28, 2022.

In Jockrim, Obiena kicked off his seven-meet winning streak by clearing 5.81 meters and beating 10 other competitors, including second placer Christopher Nilsen of the United States, who cleared with 5.71 meters, and Kurtis Marschall of Australia, who earned the third spot with the same height of 5.71 meters.

During the True Athletes Classics 2022, Obiena won thru countback after clearing the bar at 5.81 meters to finish ahead of Rutger Koppelaar of the Netherlands and Kurtis Marschall of Australia.

Aside from bagging the two gold medals, the pole vaulter also met the qualifying standard for the 2023 World Athletics Championships in Budapest, Hungary.

From his historic bronze finish in the 2022 World Athletic Championships in Oregon, United States of America, Obiena rose from number 6 to number 3 in the men’s pole vault ranking while retaining his number 1 rank in Asia.