Building an Empire. Now in New York, Mita Quiogue, entrepreneur and founder of Glossy Rejuvenating Spa is joined by friends and clients at the opening of a new branch in NYC.  February 21, 2016. Woodside, Queens. (Photos by Lambert Parong for Kababayan MEDIA/ CC BY) 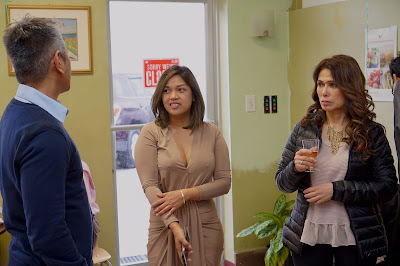 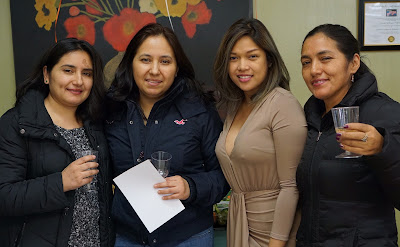 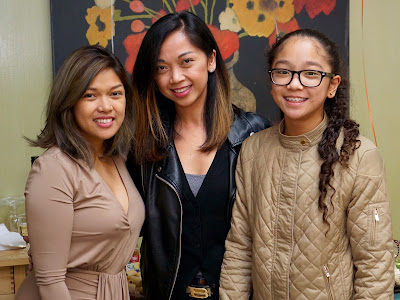 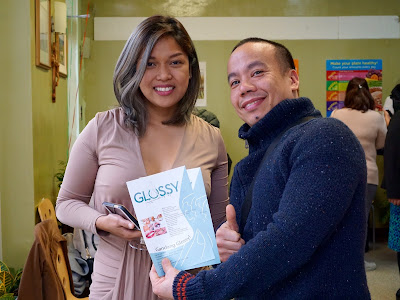 Posted by Managing Editor at 17:18 No comments: 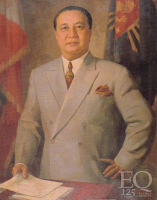 The event will coincide with the re-interment of President Quirino at the Libingan ng mga Bayani in Fort Bonifacio, Manila in a ceremony to be held the same day led by President Benigno Aquino III and members of the Quirino family. Video footage of the re-interment ceremony will be screened during the event.

Mr. Elpidio "Elpi" Pineda Quirino, grand-nephew of President Quirino and one of the members of the board of advisers of the President Elpidio Quirino Foundation, together with his wife, Elizabeth Ann, will narrate how his Lolo Elpidio's passion and commitment to the Philippines remains inspirational to this day.

Ms. Lilia Clemente, a Filipina trailblazer on Wall St., will present how President Quirino focused on the economic rebuilding of the country in the aftermath of World War II. Ms. Clemente's grandfather, Melecio Fabros, was President Quirino's Customs Commissioner during the Quirino term.

Dr. Jesus Ligot Jr., a Quirino grand-nephew and a psychiatrist specializing in post-traumatic stress syndrome, will give a talk on how President Quirino demonstrated resilience and fortitude in spite of the tragic death of his wife Alicia Syquia Quirino and their three children during the Battle of Manila in February 1945.

Michael Quirino Martinez, President Quirino's great-grandson, will give the closing remarks.
During the event, the family of President Quirino in the United States will also launch the book they co-authored titled "Statesman and Survivor Elpidio Quirino, 6th President of the Philippines", which is available on Amazon.com and Blurb.com.

The commemorative event will be a fitting tribute to President Quirino, complementing the honor accorded to him by the country through his re-interment at the Libingan ng mga Bayani in Manila, his rightful resting place, alongside past Philippine presidents, heroes and war veterans.
Posted by Managing Editor at 00:48 No comments:

Filipino American community leaders supporting the candidacy of Senator Ferdinand 'Bongbong' Marcos Jr. for the vice presidency of the Philippines got together for a Filipino breakfast forum at Tito Rad's Grill and Restaurant in Woodside, Queens, New York. Senator Marcos' campaign platforms and programs were discussed.

Candidate 'Bongbong' who is in the Philippines campaigning, joined the forum via the live video app FaceTime.

The event was sponsored by the Bongbong Marcos for Vice President Movement Northeast USA and Ako ay Pilipino Movement USA. 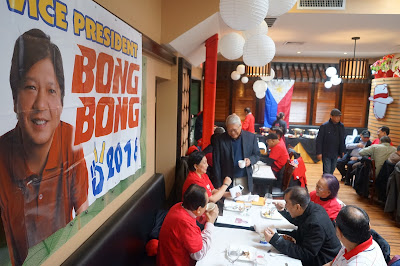 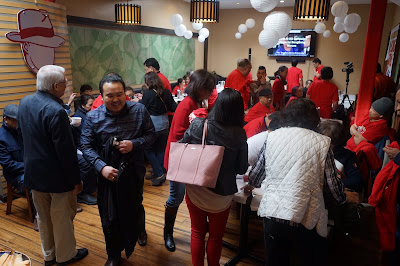 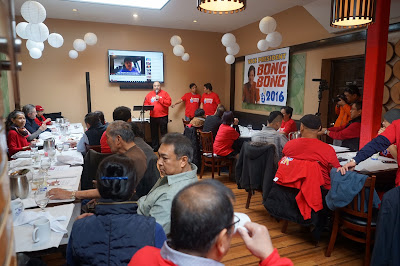 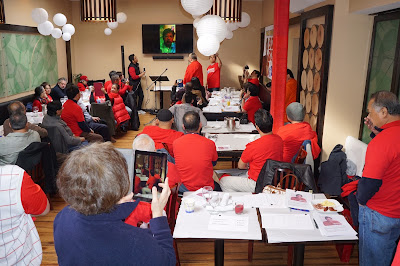 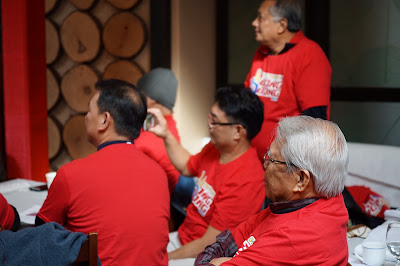 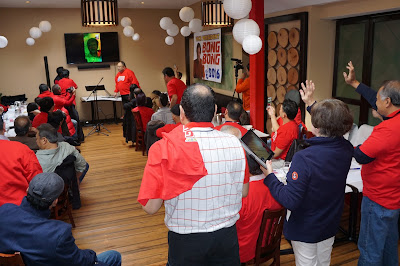 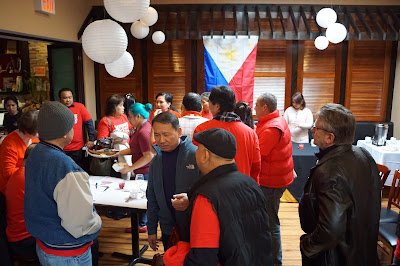 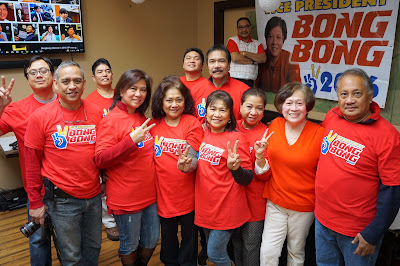 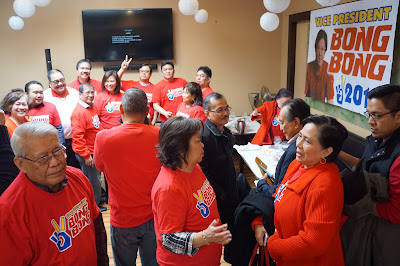 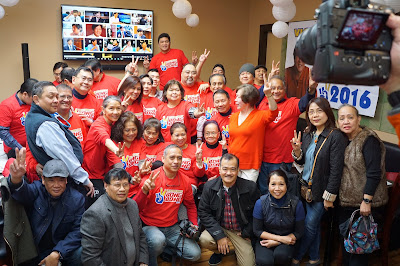 Posted by Managing Editor at 12:27 No comments:

The Philippine Consulate General and the Philippine Department of Trade and Industry in New York (PTIC) will be co-hosting a Forum on IT/BPO/KPO and Healthcare Information Management Services and its Opportunities to be held on 23 February 2016 from 9:30 AM to 12:00 Noon at the Kalayaan Hall of the New York Philippine Center.

This seminar would be an ideal opportunity for participants to learn more about the Philippines and understand why it is the preferred location for IT/BPO/KPO and Healthcare Information Management Services of major multinational companies.  Participants will be able to find out the opportunities offered to their businesses by a top player of the Healthcare Information Management Services industry in the Philippines.

Speakers for the seminar will be led by Undersecretary Nora K. Terrado of the Philippine Department of Trade and Industry, and Ms. Cristina Coronel, President of the Healthcare Information Management Association of the Philippines (HIMAP).

Posted by Managing Editor at 09:21 No comments:

NEW YORK — Asia Society is currently seeking applications for the Osborn Elliott Prize for Excellence in Journalism on Asia. The $10,000 prize is awarded annually to a reporter or team of reporters who has produced the best example of journalism about Asia during the calendar year. Evaluation criteria include impact of the work, its originality, creativity, depth of research and educational value in informing the public about Asia.
Submissions must be received by March 13, 2016.
The next winner of the “Oz Prize” will be announced at a special program at the Asia Society in New York City in May 2016.
The Osborn Elliott Prize for Excellence in Journalism on Asia honors the late Osborn Elliott, a legendary journalist and former editor-in-chief of Newsweek. Elliott set new standards for reporting and editing, and became one of the earliest practitioners of “civic journalism,” the deliberate focusing of the journalistic enterprise on urgent issues of public policy.
An independent jury of distinguished writers, award-winning journalists and Asia-hands, chaired by Marcus Brauchli, managing partner of North Base Media and former editor of the Washington Post and the Wall Street Journal, will review nominations and select the winner.
Eligibility
Submissions are only accepted electronically. Click on the icon below for submission requirements and instructions.

On the First Anniversary of the Mamasapano Incident: BAYAN-USA Hits FBI with Freedom of Information Act (FOIA) Request to Uncover Truth About FBI’s Role in Massacre of Filipinos

“Over 60 Filipinos died and witnesses also saw the body of an American at the covert U.S.-designed Mamasapano operation one year ago, yet the U.S. has still not come clean about the extent of its role in the carnage. We are filing this Freedom of Information Act request with the FBI because the Filipino and American people have the right to know the full truth about this botched mission,” stated BAYAN-USA Chair Bernadette Ellorin.
The U.S.-funded and orchestrated anti-terrorism operation “Operation Exodus” targeting alleged terrorist Zulkifli Bin Hir aka “Marwan” occurred in Mamasapano, Maguindanao in the Philippines on January 25, 2015, sending commandos of the Special Action Forces of the Philippine National Police (SAF-PNP) into territory of the Moro Islamic Liberation Front (MILF) and the Bangasamoro Islamic Freedom Fighters (BIFF), despite a ceasefire agreement and ongoing peace negotiations between the MILF and Philippine government at the time. The ensuing 12-hour battle resulted in the killing of seven civilians, 44 SAF forces, and 22 members of the MILF and BIFF. Involvement of multiple U.S. agencies including the FBI became clear as both Philippine government and civilian organizations investigated the operation. Official reports by the Philippine Bureau of Investigation and Senate cited the presence of six Americans at the Tactical Command Post for the mission, including an American who ordered a Philippine Major General to fire artillery. Philippine National Police Special Action Force (SAF) Director Getulio Napenas admitted under sworn testimony that the tissue sample of alleged terrorist target Marwan was immediately brought by the SAF to American FBI agents waiting in General Santos City, bypassing PNP Headquarters or any other Philippine agency. Witnesses cited by the Philippine media also reported seeing among the dead the body of a white American male, who is believed to have been involved in the operation even though the Philippine Constitution prohibits the participation of foreign troops in military operations on Philippine soil. In November 2015, participants in BAYAN-USA’s Peace Mission went to Mamasapano, where they spoke with widows of MILF fighters who shared accounts of white soldiers being sighted in the encounter, further pointing to U.S. military involvement.
BAYAN-USA’s FOIA request asks for documentation pertaining to the FBI’s involvement in Operation Exodus, including:
Full text of the FOIA request can be found here: http://bayanusa.org/foia.
“The U.S. has dodged accountability for the Mamasapano carnage and countless more military-related crimes against the Filipino people, but Obama and Aquino continue to push for the implementation of the Enhanced Defense Cooperation Agreement. It is senseless to give the U.S. military increased access to Philippine territory for its war games, when it won’t even admit any wrongdoing in an American operation that resulted in the killing of so many people,” said Ellorin.
“When government agencies like the FBI refuse to willingly be transparent about their actions, the public has the responsibility to use FOIA requests and all the tools at our disposal to hold government to account,” said BAYAN-USA Legal Desk member Jackelyn Mariano. “In addition to requesting information from the FBI, BAYAN-USA plans to file FOIA requests with other agencies of the U.S. government, including the Navy and the Army, to exercise our right to know the full truth about the U.S. role in Mamasapano,” continued Mariano.
“Operation Exodus at Mamasapano clearly shows how the U.S. is carrying out its ‘War on Terror’ with no regard for the lives of Filipinos, whether combatants or civilians. It carries out its war on terror without regard for the national sovereignty of the countries where the alleged terrorists are supposedly hiding. In many countries, the U.S. employs drones to target so-called terrorists, often ending up killing civilians. We demand an investigation into the U.S. role in Operation Exodus and for the termination of agreements like the EDCA which embolden the U.S. to carry out violent, covert operations with impunity. We demand accountability for the lives lost and the violation of Philippine sovereignty,” ended Ellorin.
BAYAN USA will also send additional FOIA requests to the National Security Division of the Department of Justice, Department of Defense, Department of State, Central Intelligence Agency, Defense Intelligence Agency, National Security Agency, U.S. Navy, U.S. Army, U.S. Air Force, and U.S. Pacific Command regarding the Mamasapano Incident to maximize the opportunity to unearth information about U.S. intervention in the Philippines.
Posted by News Desk at 10:15 No comments: