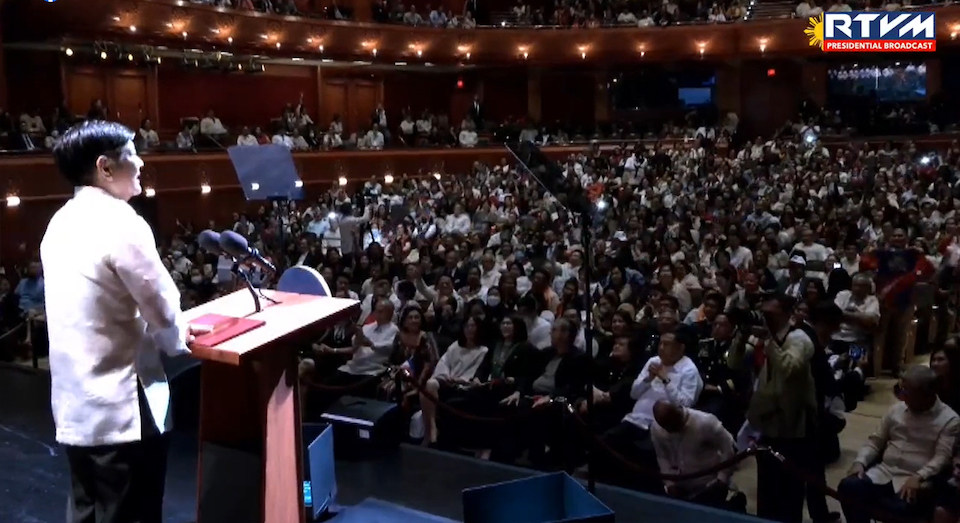 President Ferdinand “Bongbong” Marcos Jr. on Sunday began his working visit to the United States by meeting members of the Filipino community in New Jersey, where he acknowledged overseas Filipino workers (OFWs) for their sacrifices and contribution to economic recovery.

While COVID-19 has created unprecedented economic difficulties globally, Marcos cited the role of OFWs in pandemic recovery, especially the remittances that help support the economy’s recovery from the health crisis.

“We have over 10 million kababayans all over the world, and as your President, I understand and know fully well the significant impact of the Philippine diaspora on our motherland, especially in terms of supporting our post-pandemic economic recovery.”

Marcos is set to deliver the Philippine national statement at the 77th United Nations General Assembly on September 20.

His speech will cover the country’s vision of people-centered development, highlighting his administration’s thrust for recovery after years of pandemic-induced lockdowns.

The President affirmed the Philippines’ commitment to the ideals of the UN, citing the latter’s role in fostering international dialogue and cooperation.

Marcos said he will also share the country’s views on various global concerns as well as “the role the Philippines will play as a responsible member of the family of nations in addressing these concerns.”

“Habang nandito ako, we will be working hard to get other things done for the country besides addressing the UN General Assembly on Tuesday the same way my father, President Ferdinand Marcos, and my mother, Imelda Romualdez-Marcos did on several occasions during his incumbency,” said Marcos.

In the next few days, Marcos will also meet with various world leaders, business people, and potential investors and speak before economic briefings in New York.

“In the coming days, so besides the meetings with the political leadership, it will also be for potential investors, other business leaders dahil gusto natin para paahunin nga natin, para pasiglahin natin ang ekonomiya na makapag-invest at ‘pag nag-invest mayroong bagong negosyo. Kapag may bagong negosyo, may trabaho,” the chief executive added.