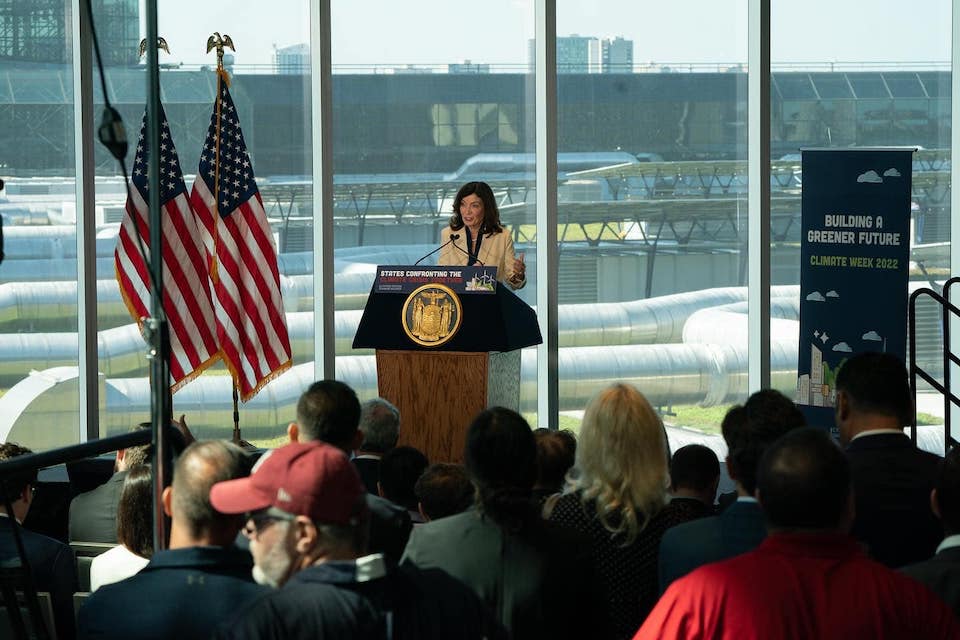 As part of Climate Week, Governor Kathy Hochul on Wednesday announced four gigawatts of distributed solar—community, residential, small commercial and industrial projects—have been installed across the state, enough to power more than 710,000 homes, underscoring New York's leadership in growing one of the strongest solar markets in the nation. Since the launch of the NY-Sun initiative, the cost of solar in New York has declined by 70 percent as solar deployment has grown nearly 2,900 percent statewide, all while helping to drive $6.4 billion in private investment and foster more than 12,000 jobs across the state. When combined with the projects that are under development and moving toward commercial operation, achieving today's milestone puts New York on track to exceed its goal to install six gigawatts of distributed solar by 2025 and progress toward 10 gigawatts by 2030. Governor Hochul was joined by U.S. Climate Alliance leaders to make the historic announcement today from the roof of the Javits Center, where they applauded progress in the installation of the largest single-rooftop solar array in Manhattan. A video of the installation overview can be viewed here. A time-lapse video of the installation can be viewed here.

"We are laser-focused on the battle against climate change, and our nation-leading advancement of renewable energy is supercharging New York's economy while creating an equitable and healthier future for all New Yorkers," Governor Hochul said. "This achievement is a testament to our successful partnership with communities and industry alike to get these projects built in every corner of the state and ensures more families and businesses will benefit from clean affordable solar power for years to come. I am proud to make today's announcement from the Javits Center, which is now home to Manhattan's largest single-rooftop solar array with an accompanying battery storage system and is setting an example for other urban commercial buildings of how to be on the cutting-edge of our clean energy future."

New York's progress from three to four gigawatts of distributed solar installations across the state was the fastest gigawatt-to-gigawatt increase to date, taking just more than a year to achieve. It has been grounded in the state's productivity coming out of the COVID-19 pandemic—with more than 1,200 megawatts of capacity installed through the first half of 2022, enough to power nearly 217,000 homes. The majority of the new distributed solar has been supported with more than $289 million in NY-Sun incentives that leveraged $1.5 billion in private investment.

The 1,400 solar panels on the Javits Center's green roof, which also serves as a habitat for area wildlife, will be supplemented by a 3.5-megawatt battery storage system. The project is the result of a public-private partnership between the Javits Center, the New York Power Authority (NYPA), and Siemens Industry, Inc. The system is the largest single rooftop solar project and will include one of the highest-capacity battery energy storage systems in Manhattan. The completion of the solar installation also coincides with the resurgence of event activity at the Javits Center following the height of the pandemic, when it served as an emergency field hospital that treated nearly 1,100 New Yorkers, and then as the largest vaccination site in the United States that distributed more than 646,000 vaccines to New Yorkers in less than six months.

Since August 2021, soon after construction of the Javits Center's 1.2 million square-foot expansion was completed and event operations resumed, 40 events have been held in the expansion, known as Javits North. Activity is continuing to grow, with 49 events booked at the iconic venue on Manhattan's West Side from September to December 2022 -- a 14% increase compared to the same period in 2021. From new corporate galas and fundraisers to trade shows and conventions, the increase in event activity can be attributed to significant infrastructure investments across the region, including a major expansion of the Javits Center, as well as the recent transformations of LaGuardia Airport and the Moynihan Train Hall. Events held at the Javits Center can attract up to 39,000 companies from around the world each year, generate up to $2 billion of annual economic activity and support up to 18,000 jobs statewide, directly and indirectly.  From West 34th to West 40th streets between 11th and 12th avenues, the expanded Javits Center features more than 200,000 square feet of new meeting and pre-function space, including The Overview, a 54,000 square-foot special event space, as well as a glass-enclosed rooftop pavilion and terrace overlooking the Hudson River. A one-acre rooftop farm and greenhouse also was constructed, creating a roof-to-table experience for convention center guests. Below the rooftop event spaces is a four-level truck marshaling facility that houses up to 200 tractor-trailers at any one time, reducing neighborhood congestion and pollution while improving traffic safety. All of the spaces are equipped with the latest technology in lighting fixtures, heating and cooling systems and wireless connectivity. The expansion has been certified LEED Gold by the U.S. Green Building Council. 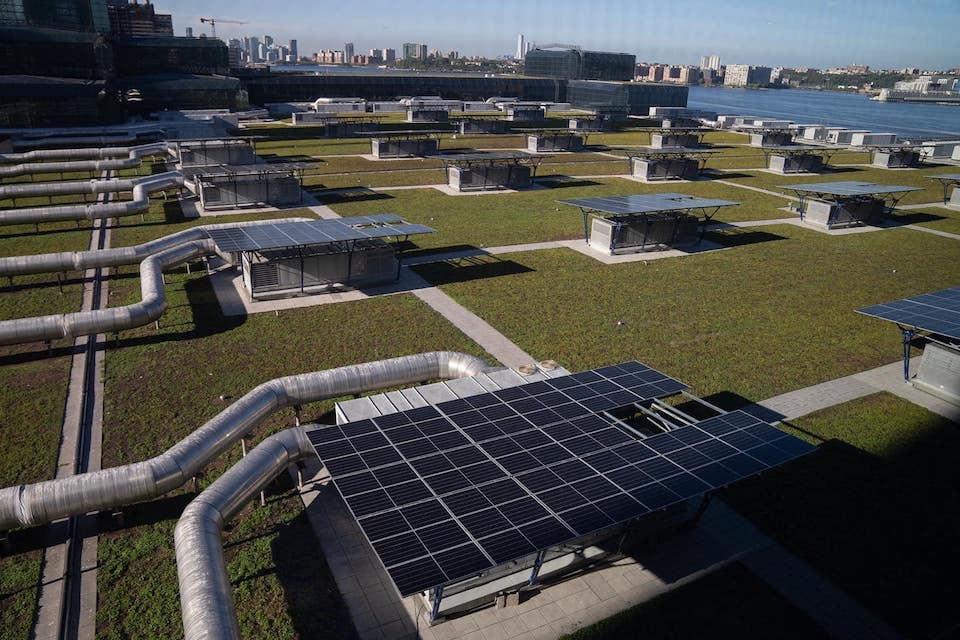 New York's success has been driven largely by community solar, an innovative business model designed to deliver the benefits of solar, including no upfront costs or participation fees, to New York consumers who are often unable to install solar on their property. Earlier this year, Governor Hochul announced New York became the top community solar market in the United States with more than one gigawatt installed, enough to power more than 200,000 homes, ensuring continued access to clean affordable solar for all New Yorkers for years to come.

The state's NY-Sun initiative has helped support the installation of solar for 166,088 New York homes or businesses spanning every county in New York with Long Island, Mid-Hudson, and the Capital Region having the most installed solar. Consistent with the Climate Act's mandate for 35 percent and a goal of 40 percent of clean energy benefits going towards Disadvantaged Communities, NYSERDA is dedicating over 1,600 megawatts, enough to power 280,000 homes, to low- to moderate-income (LMI) households, affordable housing, and disadvantaged and environmental justice communities as part of its Solar Energy Equity Framework.

In addition to the four gigawatts of distributed solar installed statewide, there is another 3.2 gigawatts of solar, enough to power 560,000 homes, that have been awarded NY-Sun incentives and are now under development across the state. These projects are expected to come online in the next two to three years with enough capacity to power an additional half million or more homes, which will bring New York State even closer to achieving the state's six-gigawatt goal. Achieving the state's solar goal of six gigawatts is expected to generate approximately $5.4 billion in private investments, and up to $500 million per year in statewide energy savings.

The rapid deployment of distributed solar across New York will be further accelerated with the extended and expanded federal Investment Tax Credit for solar and other clean energy technologies that was included in the Inflation Reduction Act of 2022. This progress is also complemented by NYSERDA's large-scale renewables program, which has active contracts with over 85 utility-scale solar projects totaling nearly seven additional gigawatts of solar under development throughout the state - enough to power nearly 1.2 million homes once completed. Together, these projects will result in more than $7.5 billion invested in New York and over 9,000 jobs in development, construction, and operations and maintenance.

New York State's nation-leading climate agenda is the most aggressive climate and clean energy initiative in the nation, calling for an orderly and just transition to clean energy that creates jobs and continues fostering a green economy as New York State recovers from the COVID-19 pandemic. Enshrined into law through the Climate Leadership and Community Protection Act, New York is on a path to achieve its mandated goal of a zero-emission electricity sector by 2040, including 70 percent renewable energy generation by 2030, and to reach economy wide carbon neutrality. It builds on New York's unprecedented investments to ramp-up clean energy including over $35 billion in 120 large-scale renewable and transmission projects across the state, $6.8 billion to reduce buildings emissions, $1.8 billion to scale up solar, more than $1 billion for clean transportation initiatives, and over $1.6 billion in NY Green Bank commitments. Combined, these investments are supporting nearly 158,000 jobs in New York's clean energy sector in 2020, a 2,100 percent growth in the distributed solar sector since 2011 and a commitment to develop 9,000 megawatts of offshore wind by 2035. Under the Climate Act, New York will build on this progress and reduce greenhouse gas emissions by 85 percent from 1990 levels by 2050, while ensuring that at least 35 percent with a goal of 40 percent of the benefits of clean energy investments are directed to disadvantaged communities, and advance progress towards the state's 2025 energy efficiency target of reducing on-site energy consumption by 185 trillion BTUs of end-use energy savings.