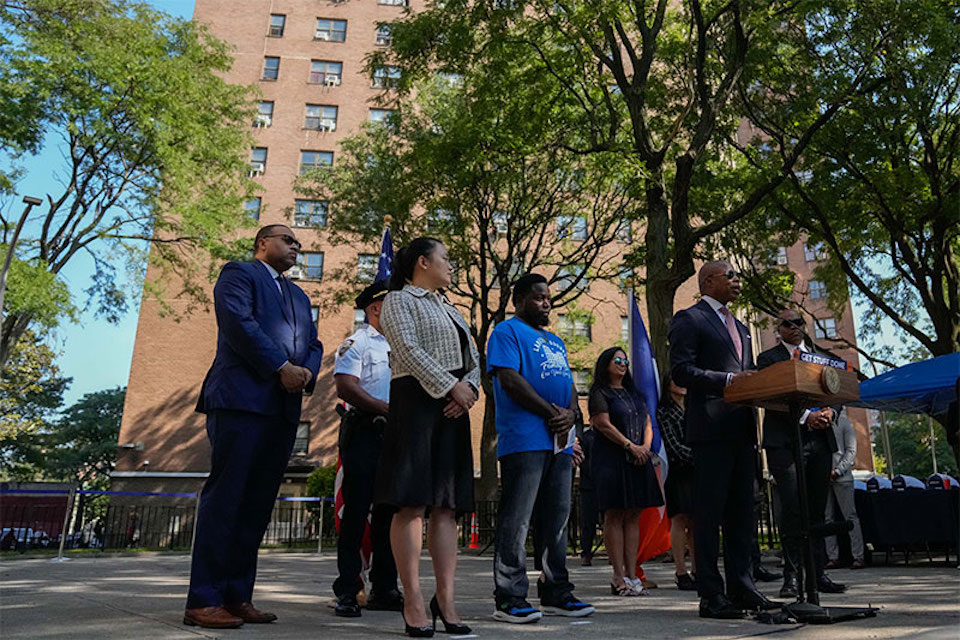 “A 21st-century city like New York deserves 21st-century infrastructure, and, today, we continue our quest to bridge the digital divide with the landmark rollout of ‘Big Apple Connect,’” said Mayor Adams. “For too long, lower-income communities, immigrant communities, and communities of color have been ignored when it comes to accessing the critical digital tools to help them succeed. Broadband is no longer a luxury, but a necessity that all New Yorkers should have access to. That’s why by the end of next year, more than 200 NYCHA developments will have access to the free high-speed internet and cable TV — giving approximately 300,000 New Yorkers access to the essential tools to live productive lives. Something as simple as providing free, accessible Wi-Fi can change the life of a New Yorker, and ‘Big Apple Connect’ will link our city to the future.”

“Big Apple Connect is an innovative program that will enhance the lives of hundreds of thousands of New Yorkers living in public housing by providing them access to necessary broadband,” said First Deputy Mayor Lorraine Grillo. “I congratulate Chief Technology Officer Matt Fraser and all of our partners in the administration on achieving this milestone today to address the digital divide.”

“‘Big Apple Connect’ is a game-changer for today’s New Yorkers living in public housing on par with the advent of utilities like heat or hot water,” said CTO and Office of Technology and Innovation (OTI) Commissioner Matthew Fraser. “This citywide broadband initiative ensures that New Yorkers need not defer their dreams — or fail to meet basic needs — because they lack the resources to pay for internet or live in a pre-war building. Our city’s students, senior citizens, parents, and job seekers who need in-home, high-speed internet access the most will experience tangible day one benefits that enrich their lives for years to come. ‘Big Apple Connect’ stands as a testament to New York City’s national leadership in promoting digital equity under Mayor Adams.”

“The launch of Big Apple Connect represents the most significant investment to date in modernizing the Authority’s broadband infrastructure for the 21st century,” said Interim NYCHA CEO Lisa Bova-Hiatt. “The high-quality internet service enabled through this program will help ensure that young people have access to online educational instruction, working parents have access to vital career opportunities, and senior residents can continue to engage with their loved ones. We commend the mayor and the Office of Technology and Innovation for their continued investments in increasing digital equity for public housing residents and look forward to implementing this initiative across NYCHA campuses citywide.”

“In 2022, in the wealthiest city in the country, no one should go without access to the internet. It is vital to our daily lives, to succeeding in school and in work, and is how we stay connected as a society, which is why ‘Big Apple Connect’ is so exciting,” said Chief Housing Officer Jessica Katz. “Bridging the digital divide is at the heart of building a more equitable city, and I want to thank Chief Technology Officer Fraser for putting NYCHA residents at the heart of this effort.”

Big Apple Connect will provide residents of NYCHA developments a free bundle that consists of in-home, high-speed internet connection, including a modem and router; basic cable TV service, including a cable box and remote control; and common area Wi-Fi hotspots, selected in consultation with NYCHA.

After requesting proposals earlier this year from existing New York City cable TV franchisees, the city entered into three-year agreements with Altice (Optimum) and Charter (Spectrum), which will collectively cover the majority of developments owned and managed by NYCHA. The city is continuing to negotiate with Verizon as a possible third franchisee. OTI will be billed directly for all residents enrolled in ‘Big Apple Connect’ for the three-year term.

NYCHA residents will not be billed anything for these services. Existing customers of Optimum and Spectrum living in NYCHA developments where ‘Big Apple Connect’ is active will be automatically enrolled in the program and will only be billed for additional services they choose to purchase directly. Residents will receive email notifications and mailers explaining why their bills were lowered, as well as information on ‘Big Apple Connect.’ Residents without existing service will have the opportunity to sign up directly though Spectrum or Optimum or may attend on-site enrollment events conducted by the companies in partnership with OTI.

An estimated 30 to 40 percent of NYCHA residents lack broadband, according to cable service providers. Once its rollout is complete, ‘Big Apple Connect’ is projected to be the largest municipal program to cover the cost of internet for public housing residents in the nation. NYCHA residents enrolled in ‘Big Apple Connect’ will also be able to use the federal Affordable Connectivity Program benefit to save money on their cell phone bills. The Affordable Connectivity Program provides a discount of up to $30 per month toward internet or cellular data service for eligible households and is limited to one monthly service discount per month.

The site of Mayor Adams’ announcement today — Langston Hughes Houses — has served as one of eight select pilot sites, where best practices on community engagement and promotion were assessed. Since the pilot’s debut last month at Langston Hughes, more than 200 existing customers of Optimum have been automatically converted and 120 new subscribers have been added.

Nearly 350 Langston Hughes units — or approximately two-thirds of households at the development — are already enrolled in Big Apple Connect.

In addition to the Langston Hughes Houses in Brooklyn, the other pilot sites in the five boroughs included: