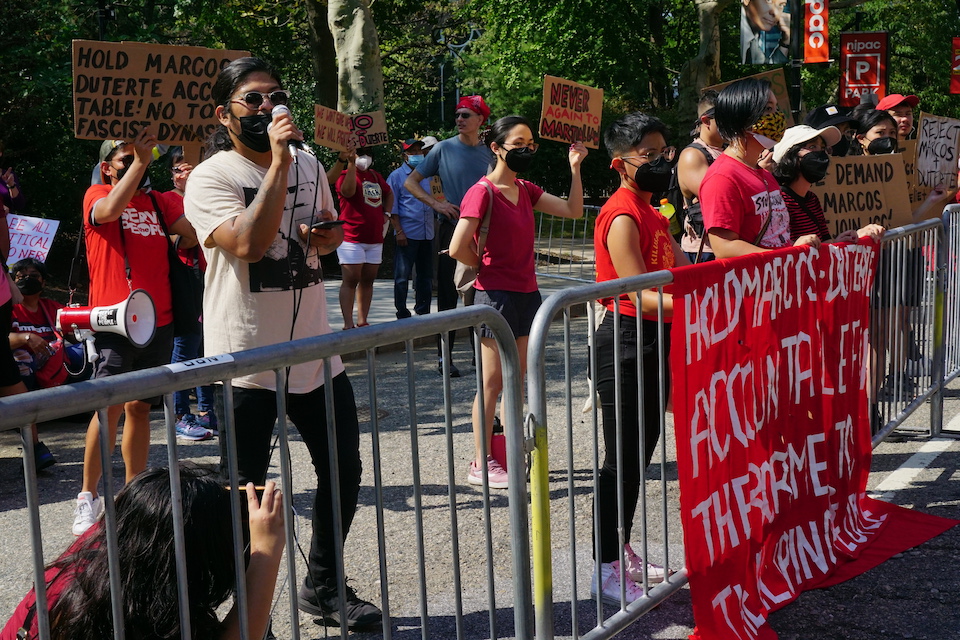 President Bongbong Marcos was welcomed with a noisy protest rally by members of Malaya US Movement in New Jersey and New York wearing red Tshirts and shouting as they marched, "MARCOS, MARCOS MAGNANAKAW, MANDARAYA!"

According to Malaya spokesperson, Yves, they were protesting against Marcos-Duterte for accountability.

Yves also said about their red shirts which BBM used as official team color in the last election, "Yes, we reclaim red, it is the color of the Katipunan and genuine revolutionaries who fought for our freedom."

"They already stole so much from the people, we can’t allow them to steal this one too."

Without any tangible and con- crete accomplishment during his 2.5 months in office, Mr. Marcos, asked Filipinos in America to go back to the Philippines and either work or invest in business there. According to Marcos this should be done for "love of the motherland ." (How can one invoke love of motherland if that one is not paying taxes)?

I see the call as fake and weird because Filipinos in America have established a life in this country. Furthermore, are there jobs in the PH for those who will give up their jobs in America?

Many keen Filipinos are convinced that Mr. Marcos is not a legitimate president who won the election fair and square. Why should Fil Ams listen to him? Those who came last night to the NJ arena to listen to the Marcos speech should also listen to the talks of the young FilAm members of Malaya US Movement who spoke at the anti-Marcos rally.

There is a growing perception in the PH that its top offcials, led by its president and vice president, are greedy for the people's taxpayers' monies as they want hundreds of billions of pesos appropriated for their unbelievable budget, confidential funds and