New York, N.Y. – On the eve of the declaration of Martial Law, Filipinos and allies in solidarity throughout the Northeast rallied and marched the streets of New York City to protest the participation of Philippine President Ferdinand “Bongbong” Marcos Jr. at the 77th General Assembly of the United Nations. This demonstration was part of a National Day of Action across the U.S. to remember the 50th anniversary of the Declaration of Martial Law by then-Filipino president Ferdinand Marcos Sr. (father of Marcos Jr.), whose 14-year period of brutal state repression (1972-1986) led to tens of thousands of Filipinos being unlawfully imprisoned and tortured, and thousands more being executed without fair trial. 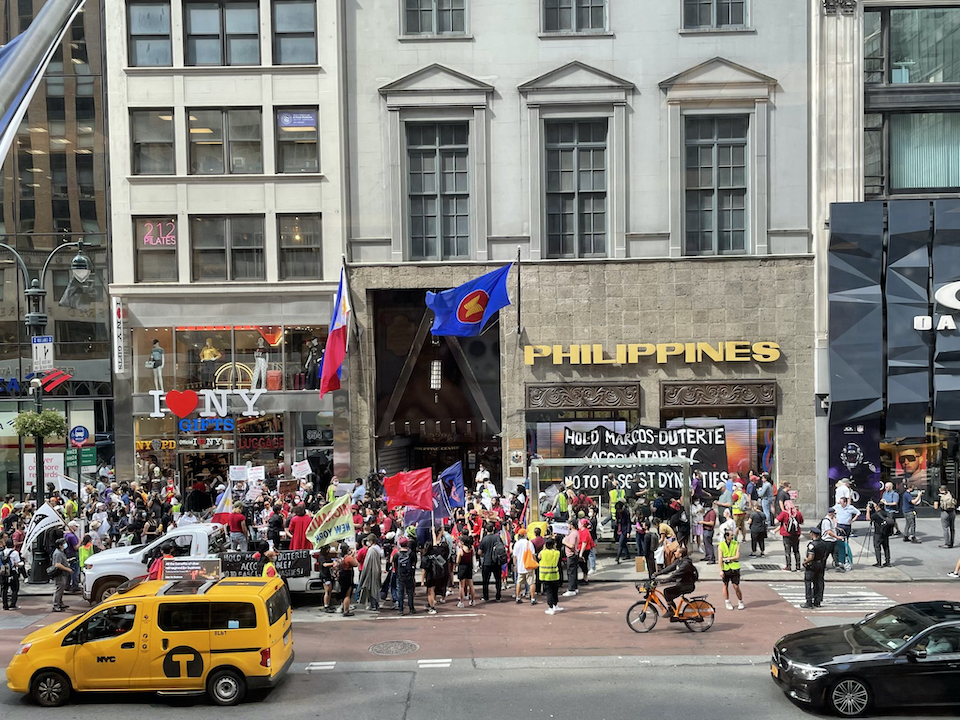 Led by the Northeast Coalition to Advance Genuine Democracy (NECAGDP), the crowd of 300 marched from the Philippine Consulate across 42nd Street to the Dag Hammarskjold UN Plaza, bearing images of victims and survivors of Marcos Sr.’s martial law and a banner that read, “Hold Marcos-Duterte Accountable! No to Fascist Dynasties in the Philippines!” Educational teach-ins, songs, and a guerilla theater were also part of the program. Individuals from a large range of organizations spoke at the action, uncovering the truths that Marcos Jr.’s own speech in the United Nations sought to conceal.


Although Marcos Jr. focused much of his speech on the historical impact and injustice of climate change on the Philippines (and suggested foreign investments as a form of reparations by developed countries), Jon Bonifacio, an activist with Kalikasan (a Philippine-based coalition of environmental organizations), described the devastation the Marcos family – with their “well-oiled disinformation machine” – has inflicted upon the environment of the Philippines.

“Under the dictator Marcos [Sr.], 8 million hectares of Philippine forests were cut down by Marcos cronies, while farm lands were degraded under the auspices of the so-called Green Revolution,” Bonifacio explained. “With the political return of the Marcoses, we can expect all of this to happen again.”


A group of Marcos-Duterte supporters were present at both the Philippine Consulate and the UN Plaza to counter-demonstrate, holding placards calling for free education and economic sovereignty (promises made by the Marcos-Duterte administration) – but speakers from NECAGDP explained how the Marcos dynasty’s policies in practice have always contradicted those desires.

One such personal testimony came from Shaira Cruz of Migrante New Jersey, who recounted her family being forced to leave the Philippines due to the implementation of the 1974 Labor Export Policy (LEP), a botched attempt by Marcos Sr. to fix the economy that ultimately led to the mass migration of hundreds of thousands of Filipinos. She condemned it as “a system made to profit from Filipino labor overseas, in order to pay the debt of the Philippines and grow his family’s wealth.” Almost 50 years later, millions of Filipinos remain jobless, the value of the Philippines peso continues to drop, and Marcos Jr. continues to slash the budget for social services.


Beyond the Filipino diaspora, allies from other movements expressed the importance of international solidarity against state violence and imperialism. Basil from Palestinian Youth Movement identified that “the U.S. imperial core is the lifeblood of both of our people’s subjugation… and our freedoms are connected today by joint struggle.”

In fact, after 09/20, coalition members took initiative and launched quick response mobilizations and actions to directly counter the narratives and rhetoric that Ferdinand Jr peddled in other engagements through the rest of the week.


“That is why we’re here today, and that is why we’ll be here tomorrow, and the day after that, until all of our peoples are free,” he declared.

What was displayed outside of the United Nations is the unwavering determination of the Filipino diaspora for genuine democracy, freedom, and sovereignty for their home country.  For the Coalition members, the September 20 protest is a community action “to right and to write history” by rejecting the Marcos-Duterte regime. To quote the final words of human rights lawyer Ruben Carranza’s speech, “We can fight, we can win again, and the Marcoses will be defeated.”