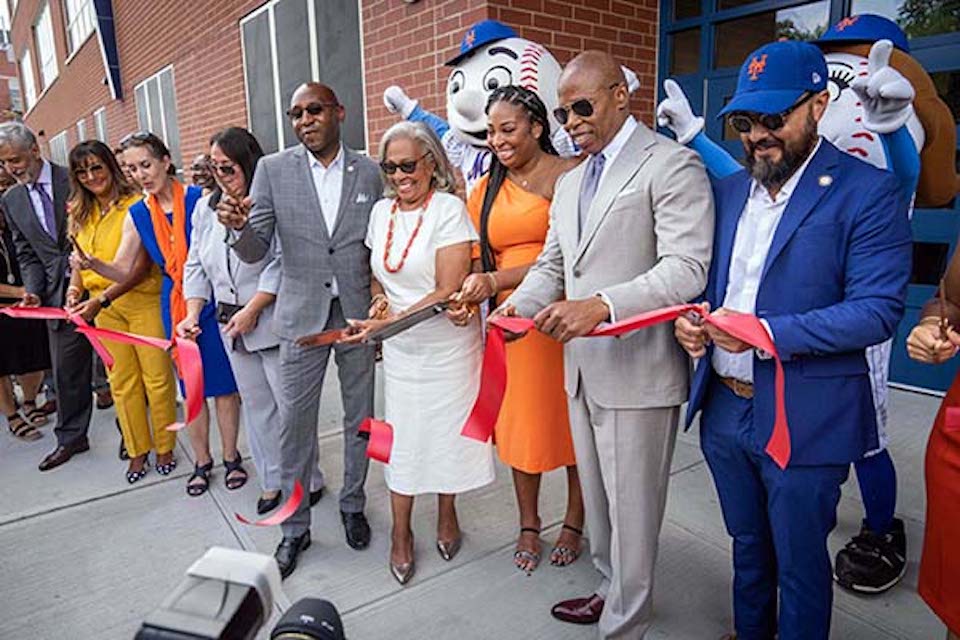 Agee, who died in 2001, spent five seasons playing centerfield for the New York Mets, from 1968 to 1972. Regarded as one of the club’s all-time best centerfielders, Agee helped the Mets win their first World Series at nearby Shea Stadium in 1969. Agee’s wife, Maxcine, and daughter, J’nelle, as well as teammates Cleon Jones and Art Shamsky, joined the celebration of the school’s opening.

“Tommie Agee was not only part of the greatest ball club in this country, but a star player on the greatest team there ever was: the 1969 Amazin’ Mets,” said  Mayor Adams. “His presence fed the energy of New York City and we’re thrilled to celebrate Tommie’s contributions today at the new Tommie L. Agee Educational Campus. By continuing to create and improve the school buildings that the city’s children need and deserve, we are investing in New York City’s future. Congratulations to Tommie’s family, former teammates, and all Mets fans.”

“This brand new state-of-the-art facility is another example of the SCA’s ability to provide much needed new school seats to New York City’s students and families. I am proud of the SCA’s continued track record in helping to reduce overcrowding and provide nurturing learning environments,” said SCA President and CEO Nina Kubota. “I would like to thank all of the District 24 elected officials, community leaders, and other stakeholders for their support of our Capital Plan, which has enabled us to provide this new facility to meet the needs of this school community.”

“Our school buildings are extensions of our children, their families, our neighborhoods, and, most importantly, of our communities. The Tommie Lee Agee School is an incredible example of just that — a school that has the power to bring people, teammates, family members, students, and community members together to honor one of their own,” said DOE Chancellor David C. Banks. “Thank you to our partners at SCA for this beautiful new school building and, of course, to the New York Mets for modeling teamwork and community for our young folks and our city every day.”

“Tommie would have been so very proud to be recognized with his name on this beautiful state-of-the-art facility, making educational opportunities available to the students of East Elmhurst,” said J. Maxcine and J’nelle Agee. “Tommie was a true gentleman, on and off the field, and gave back in so many ways through his service and foundation. We, along with the New York Mets, are proud to share his contributions with the Queens community he called home.”

“This is such a fitting dedication — to name a school after Tommie in Queens,” said Sandy Alderson, president, New York Mets. “Queens was Tommie’s home. He lived, worked, and played here, and I know how proud he would be since education and community involvement were so important to him. The Mets are grateful to share this special day with Tommie’s family and teammates.”

“I am so grateful that the legacy of Mets legend Tommie L. Agee will live on in the naming of the new school I.S. 419 in East Elmhurst, Queens located minutes away from where the old Shea Stadium once stood,” said New York State Assemblymember Jeffrion Aubry. “Tommie gave so much to his adopted hometown of Queens and the community is now recognizing his many contributions. I would like to thank all those who helped to make this possible.”

The new state-of-the-art school — located at 111-12 Astoria Boulevard — will serve students from grades 6 to 8. The 646 new seats will help alleviate overcrowding in District 24 as part of the more than 2,800 new seats created in Queens for the 2022-2023 school year.

“Tommie Agee’s on-field talent was a big reason why the Miracle Mets won the 1969 World Series, but his talent was matched only by his grit and determination — exemplifying the borough he loved and called home,” said Queens Borough President Donovan Richards. “The students of the new Tommie Agee Middle School exemplify those characteristics too. I couldn’t be prouder to help unveil 646 badly needed new school seats in the borough as we ensure Tommie’s legacy lives on.”

“Tommie Agee is special to Queens, and not just because of his incredible career with our beloved Mets. He has stayed in this community, giving back through charitable events and youth baseball, building a legacy as a member of our community in his own right,” said New York State Senator Jessica Ramos. “I'm thrilled that we can honor his work and his contributions to East Elmhurst here at I.S. 419.”

“It's no secret that New York City schoolchildren need more schools built for them to lower class sizes. With the opening of I.S. 419, our city is taking one step on the long walk towards educational equity,” said New York City Councilmember Rita Joseph, chair, Committee on Education. “I'm so excited for the Queens families who will benefit from this school, and I can't wait to see the great work that the students and educators do at the Tommie L. Agee Educational Campus!”

“There is nothing more exciting than opening the doors to a new state-of-the-art school in my district but opening the doors to a school named after one of my beloved Mets players makes it even more sweet,” said New York City Councilmember Francisco Moya. “Tommie Agee loved Queens and called it home. He would be proud to see that his legacy lives on and is a part of educating the young people of East Elmhurst just a stone’s throw from where he played the sport he loved.

“We are thrilled to name 24Q419 after the great Tommie L Agee. The school will exemplify all of the wonderful characteristics that Mr. Agee portrayed: fortitude, perseverance, strength and strong values,” said DOE School District 24 Superintendent Madelene Chan. “Our community is thankful to the School Construction Authority for this amazing building!”