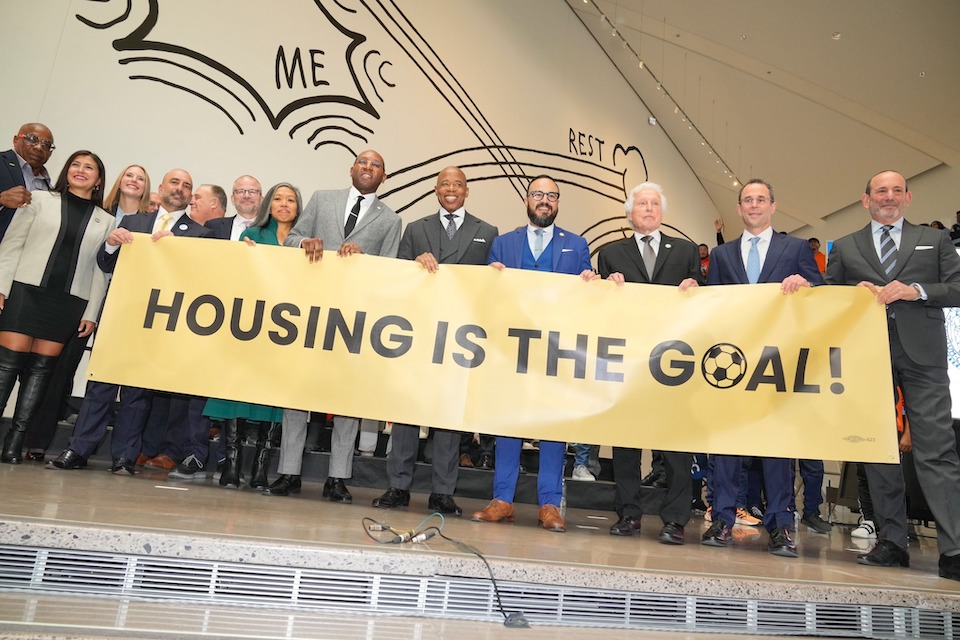 It’s time to create a New York City where working New Yorkers can have safe, affordable homes, find well-paying jobs, send their children to good schools, and live close to public transportation so that they don’t have to spend hours commuting.

Willets Point in Queens, previously known as the “Iron Triangle” or the “Valley of Ashes,” was filled with auto repair shops, prone to flooding and lacked infrastructure.  Today, it offers our city a once-in-a-generation opportunity to create a vibrant, thriving neighborhood from scratch.

The cornerstone of Willets Point will be 2,500 new homes that are 100% affordable.  That’s the largest 100% affordable housing project in New York City since the 1970s.  Many of these rental homes will be within reach to families making $40,000 a year or less.  This is a game changer for so many New Yorkers.  Environmental cleanup and infrastructure improvements for sewage, storm lines and water mains are already underway.  And we are breaking ground on the first phase of housing in 2023—one year early!

The neighborhood will also have a 650-seat K-8 school, retail space that serves local residents, 40,000 square feet of open space, as well as a hotel and a Major League Soccer stadium.  Both the stadium and the hotel will be 100% privately financed.  The city will not be spending a single dollar on their construction.  The stadium will be New York City’s first professional soccer-specific stadium, and a permanent home for the 2021 MLS Cup champions: the New York City Football Club.

The stadium and the hotel will be constructed with union labor, and will prioritize working with minority and women-owned businesses, and hiring locally.  Through the redevelopment of Willets Points, we will create 14,200 construction jobs, and 1,550 permanent jobs from the stadium, hotel, retail and housing.  Because that’s what New Yorkers deserve: good jobs, homes, and the chance to gain a secure financial footing so they can raise their families and grow old in the city that they love.

Willets Point will also cement Queens’ reputation as a world-class sports destination.  With the new stadium, the Mets’ Citifield, and the Billie Jean King National Tennis Center, we will have soccer, baseball and tennis all in one place.  World-class sports for the World’s Borough—all just minutes away from the Long Island Railroad, the Mets-Willets Point station on the 7 train, JFK and LaGuardia Airports, and within walking distance from Flushing Meadows Park.

The Willets Point project grows out of a vision first developed by members of the community back in 2018, and local residents will continue to be heard throughout the approval and construction process.

This project delivers on my blueprint for economic recovery and for affordable housing.  It is the result of a public-private partnership between New York City, the New York City Football Club, and Queens Development Group (a joint venture of Related Companies and Sterling Equities).

We are delivering housing across the five boroughs, and this Willets Point project, combined with the Innovation Queens project, would have advanced 8,000 housing units in November alone.

Willets Point gives us an opportunity to create a new neighborhood with homes, schools and economic possibilities. It gives us an opportunity to re-envision how our city can meet the challenges of the 21st Century, like housing, climate change and developing pathways to financial stability for all New Yorkers.  As our city rebuilds from the pandemic, we are reimagining our neighborhoods and our boroughs to ensure that everyone benefits from our prosperity, not just the few.  Willets Point is just the start.