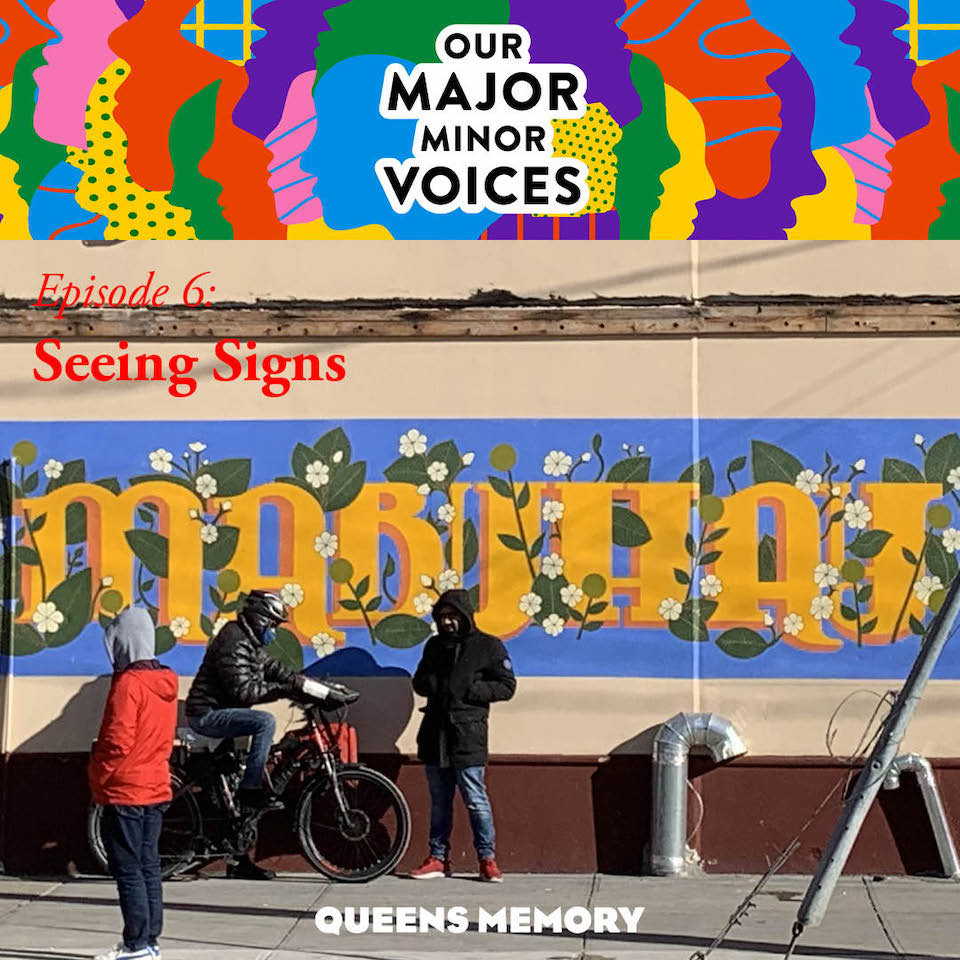 QUEENS, NY - Queens Memory – a community archiving program supported by Queens Public Library and the Queens College Library – will release the next bilingual episode of its latest podcast, “Our Major Minor Voices” in English and Tagalog versions on Monday, May 16.

“Seeing Signs” (English)/”Tanáw” (Tagalog), produced by Rosalind Tordesillas, covers the history and challenges of the Filipino community in Woodside, as it strives for greater visibility. It features residents, business owners, and community leaders, including Jaclyn Reyes of Little Manila Queens Bayanihan Arts, Zenaida and Joe Castillo of Phil-Am Food Mart, and Steven Raga of Woodside on the Move. An in-person listening event will be held at the Woodside library branch, 54-22 Skillman Ave, Woodside, NY 11377, on May 19th, 6:00-7:30 pm with Jaclyn Reyes, Joe Castillo, and Potri Ranka Manis Queano Nur as featured speakers.

This season documents the experiences of the borough’s diverse Asian communities in their own voices, and includes eight bilingual episodes representing the most widely spoken Asian languages in Queens: Bangla, Hindi, Korean, Mandarin, Nepali, Tagalog, Tibetan, and Urdu.

“In this season, we wanted to focus on Asian American communities in Queens because we know that the accomplishments and the struggles of our Asian American neighbors are often not as visible in the media landscape as they ought to be,” said Queens Memory Project Director, Natalie Milbrodt. “The interviews our producers conducted during this project will become part of the Library’s permanent archives, helping us add perspectives and languages not yet well represented in our Queens Memory collection consisting of over 900 interviews. Future researchers curious about the lives of Asian Americans living in Queens way back in 2022 will be so glad we did this project!”

Rosalind Tordesillas, producer of the Tagalog episode, said: “It's been a joy to produce this episode in Tagalog and immerse myself in the language so much more deeply than I've had a chance to in so long. It's important that people can tell and hear their stories in words that feel most comfortable.”

The season premiered on April 11, 2022 on the Queens Memory website. New episodes are released weekly and are available on Apple Podcasts, Stitcher, Google Play, Spotify, and other major podcast platforms. Visit queensmemory.org/podcast for episodes and show notes.

The first season of the Queens Memory podcast focused on Memories of Migration, while the second one documented life in Queens during COVID-19.

The third season of the podcast has been made possible in part by the National Endowment for the Humanities: Democracy demands wisdom.

Queens Memory is an ongoing community archiving program supported by Queens Public Library and Queens College, CUNY. We engage with Queens residents in our two-fold mission to (1) push local history collections out to the public through programming and online resources, and (2) pull new materials into our collections from the diverse communities of Queens. The goal is to raise awareness and a sense of ownership in the production of our shared historic record and our dream is that any Queens resident who visits these collections feels his/her experiences and perspective are represented. Queens Memory also provides training and materials for anyone wishing to contribute oral history interviews, photographs, or other records of his/her neighborhoods, families, and communities. These materials get a permanent home in the Archives and are shared back with the public on a variety of platforms including Aviary, Urban Archive, our podcast series, Instagram, and in the archival repositories of Queens Public Library and Queens College’s Rosenthal Library. Queens Memory was founded in 2010 and has been honored with the 2014 Archivists Round Table Award for Educational Use of Archives and the  2019 New York State Archives’ Debra E. Bernhardt Annual Archives Award for Excellence in Documenting New York’s History.

Queens Public Library is one of the largest and busiest public library systems in the United States, dedicated to serving the most ethnically and culturally diverse area in the country. An independent, non-profit organization founded 125 years ago, QPL offers free access to a collection of more than 5 million books and other materials in multiple languages, technology and digital resources, and more than 80,000 educational, cultural, and civic programs annually. QPL consists of 66 locations across the borough, including branch libraries, a Central Library, seven adult learning centers, a technology center, and two teen centers, and attracted more than 11 million visitors in 2019.