The Solemn Pontifical Mass of Cardinal Luis Antonio Tagle, Prefect of the Vatican Commission on Evangelization will be held on Sunday, June 1st, at 10AM at St. Patrick’s Cathedral in New York City commemorating the 40th Anniversary of San Lorenzo Ruiz Devotion in the United States.  To RSVP or for more information, contact sanlorenzo40th@gmail.com.  For more information, contact Fr. Erno Diaz at 646-466-8761.

The patron saint of the Philippines and the Filipino people, Lorenzo Ruiz a Chinese Filipino recognized for his martyrdom after his execution in Japan by the Tokugawa Shogunate during its persecution of Christians in the 17th century.

Headed by New York based Father Erno Diaz, the Steering Committee is overjoyed to have Filipino Cardinal Tagle from Rome as the main celebrant of the Anniversary Mass.  Archbishop Gabriele Caccia, Permanent Observer of the Holy See to the United Nations (New York) is the Principal Concelebrant.

“God Almighty has blessed the Philippines with 500 years of Christianity that, in His Divine Providence, produced its first Saint in the person of San Lorenzo Ruiz,” said Father Erno. “In America, particularly, in New York, 40 years of devotion to San Lorenzo has been a Time of Grace.” 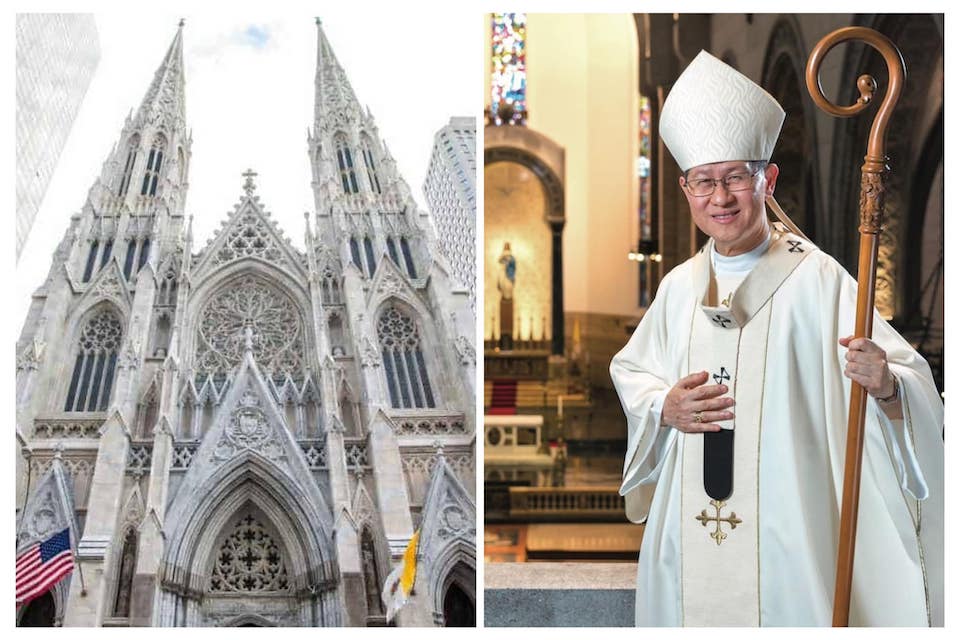 San Lorenzo Ruiz served as an altar boy at the Binondo Church. He was educated by the Dominican friars. He was a member of the Confraternity of the Most Holy Rosary. He married Rosario and had two sons and a daughter.

In 1636, while working as a clerk for the Binondo Church, Lorenzo was falsely accused of killing a Spaniard, Lorenzo sought asylum on board a ship with three Dominican priests: Antonio Gonzalez, Guillermo Courtet and Miguel de Aozaraza, a Japanese priest, Vicente Shiwozuka de la Cruz, and a lay leper Lazaro of Kyoto.  Lorenzo and his companions sailed for Okinawa in June 1636, with the aid of the Dominican fathers.

The Tokugawa Shogunate was persecuting Christians because they feared that was how the Spanish invaded the Philippines by using religion by the time Lorenzo had arrived in Japan. The missionaries were arrested and thrown into prison, and after two years, they were transferred to Nagasaki to face trial by torture. The group endured many and various cruel methods of torture.

In September 1637, Lorenzo and his companions were taken to Nishizaka Hill, where they were tortured by being hung upside-down over a pit. He died two days later on September 29, 1637, at age 42.

His canonization was supported by a miracle in October 1983, when Cecilia Alegria Policarpio of Calinog, Iloilo, was cured of brain atrophy (hydrocephalus) at the age of two, after her family and supporters prayed to Lorenzo for his intercession.

Cardinal Tagle is a Filipino prelate of the Catholic Church who has been the Prefect of the Congregation of the Evangelization of Peoples since December 2019.  He was the 32nd Archbishop of Manila from 2011 to 2019.  He also serves as president of Caritas International, a federation of Catholic relief, development and social service organizations, and of the Catholic Biblical Federation.

Tagle holds a BA degree in pre-divinity from Ateneo and a MA degree in theology from Ateneo’s Loyola School of Theology. He earned his Doctorate in Sacred Theology at the Catholic University of America.

He was ordained in the Diocese of Imus, Cavite, Philippines in February 1982.  In December 2001, Tagle was appointed Bishop of Imus.

On February 22, 2021, Tagle was appointed by Pope Francis as a new member of the Administration of the Patrimony of the Holy See, the office of the Roman Curia that deals with the "provisions owned by the Holy See in order to provide the funds necessary for the Roman Curia to function".

“Let us join our Filipino Cardinal in Rome, His Eminence Luis Antonio Tagle, Prefect on Evangelization, as he celebrates a Solemn Mass of Thanksgiving on June 1st at 10AM in St. Patrick’s Cathedral.” Said Fr. Erno.