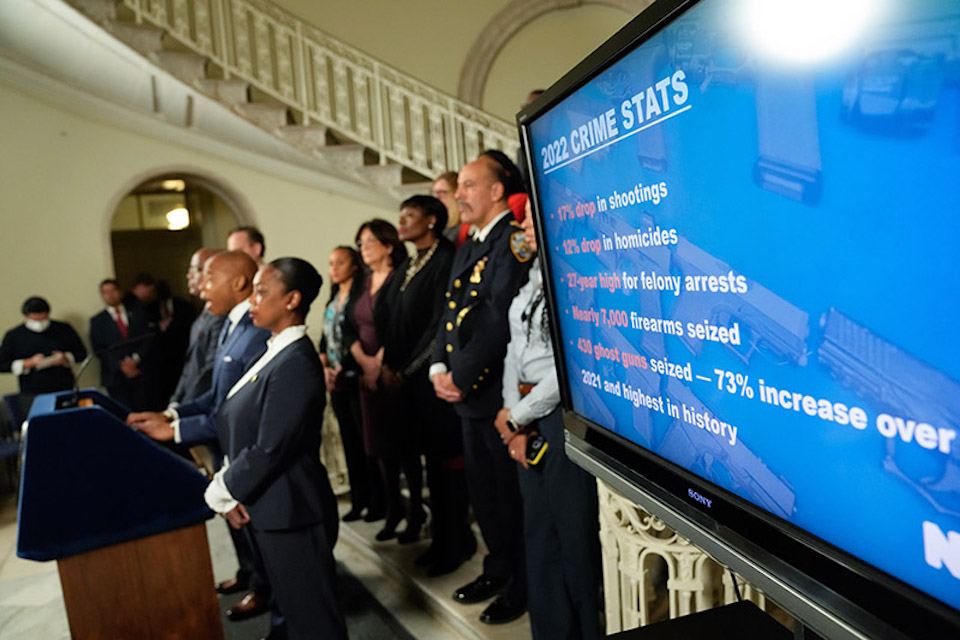 NEW YORK – New York City Mayor Eric Adams and senior leaders of the Adams administration’s public safety team on Wednesday December 21st,  highlighted key public safety achievements made during Mayor Adams’ first year in office. While acknowledging that more work must be done to make all New Yorkers safe, Mayor Adams pointed to key indicators of progress, including double-digit decreases in shootings and homicides; a recent downtick in major crimes, both on the streets and in the subways; an increase in weapons found in jails; increasing fire safety training; and a reduction in pedestrian deaths; among other items.

“It’s been almost a year since I took office as mayor, and thanks to Deputy Mayor Banks, Police Commissioner Sewell, the multitude of commissioners in our administration focused on public safety, and all their teams, we are making our city safer every day,” said Mayor Adams. “Murders and shootings are down by double digits this year, and, more recently, major crimes are down both on the streets and in the subways. We’re also making great strides through all of our different public safety agencies. We knew these changes wouldn’t happen overnight, but, every day, we continue to dam the many rivers that feed the sea of violence in our city with investments in both intervention and prevention. We’ll continue to engage New Yorkers at every level on the issue of public safety and make sure 2023 is even safer.”

Gun Violence – During year one of the Adams administration, the New York City Police Department’s (NYPD) strategies to address gun violence have had made a significant impact:

Subway Safety – In February, Mayor Adams announced phase 1 of his Subway Safety Plan to reduce crime in the subway system. In addition to efforts address transit crime, the administration made comprehensive investments to provide shelter to more than 3,000 New Yorkers experiencing homelessness in New York City subways. In October, Mayor Adams and New York Governor Kathy Hochul announced a surge of 1,200 additional overtime NYPD shifts in New York City subways to increase patrols on platforms and trains each day. The NYPD alone has completed more than 1 million subway station inspections in 2022, resulting in real progress in the transit system, including:

Corrections – The New York City Department of Correction (DOC) has made significant progress addressing staff shortages and investing in its workforce, upgrading jails infrastructure, and taking steps to reduce violence behind bars:

Fire Safety and Emergency Management – In 2022, the Fire Department of the City of New York (FDNY) made a concentrated effort to educate New Yorkers about fire safety and enhance emergency preparedness:

Traffic Safety – New York City is reducing traffic violence — bucking trends being experienced in the rest of the nation, which has seen pedestrian fatality rates reach a four-decade high:

Mayor Adams provided a preview of plans to announce additional strategies for improving public safety in the weeks ahead, including in his upcoming State of the City address next year: