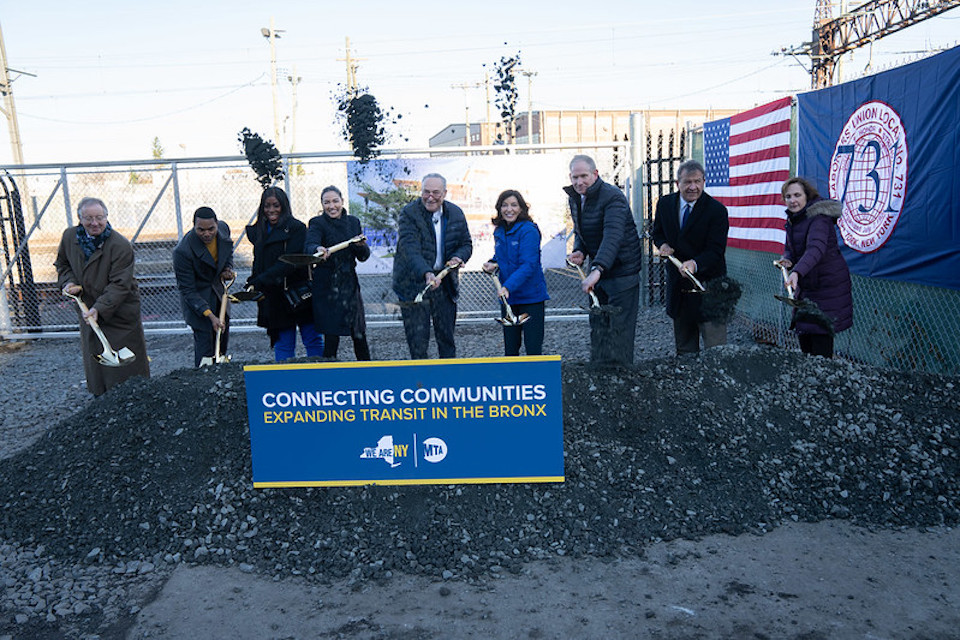 Governor Kathy Hochul on Friday December 9th, announced the groundbreaking for the Metro-North Penn Station Access project alongside leaders from the Metropolitan Transportation Authority during a ceremony in the Bronx this morning. With four new stations in the Bronx, this project will bring rail service within one mile of 500,000 residents and will be the largest expansion of Metro-North Railroad since it was founded in 1983. By offering rail service to and from Manhattan, Westchester and Connecticut, this will expand access to jobs, education and entertainment for East Bronx communities. Additionally, the project will greatly reduce travel times, provide reverse commuting opportunities and offer a critical second route into Manhattan for the first time ever through Metro-North.

"We are bringing modern, safe, and reliable public transportation to East Bronx communities and with it, more economic opportunity for New Yorkers," Governor Hochul said. "In partnership with Senator Schumer, Representatives Torres, Ocasio-Cortez, and Bowman, and Amtrak, Penn Station Access will not only drastically reduce commute times, but it will also help connect hundreds of thousands of residents and boost local economies. I'm thankful for MTA's partnership to get this project off the ground, and I look forward to seeing the completed project to help ensure all New Yorkers have access to the modern public transportation that they deserve."

The four new stations will be in Hunts Point, Parkchester/Van Nest, Morris Park, and Co-Op City and will be accessible to all in accordance with the Americans with Disabilities Act.

The expansion will use Amtrak's Hell Gate Line to access Penn Station, optimizing existing infrastructure and minimizing the construction impact on surrounding communities. Metro-North trains stopping at the four new Bronx stations will serve as an extension of the New Haven Line from the New Rochelle Station, offering transit options in the East Bronx to Midtown Manhattan as well as points in Westchester, Connecticut and inversely.

The infrastructure improvements along the Hell Gate Line will also improve service reliability and on-time performance for Amtrak, who is contributing $500 million toward the project, thanks to the efforts of Senate Majority Leader Charles Schumer. Amtrak has also agreed to pay the costs of delay if they fail to meet commitments to provide outages or workforce. The total cost of the project is projected at $3.18 billion, following a Capital Plan amendment announced in July to include additional funding for expansion of the New Rochelle Yard.

In addition to four new ADA stations, the project will turn the existing 2-track railroad into a largely 4-track railroad, with over 19 miles of new and rehabilitated track work. This expansion to a 4-track railroad will provide service flexibility to support the increase in Metro-North and Amtrak trains expected to operate through the area and allow for workarounds in the event of a service disruption.

The additional service necessitates an expansion of Metro-North's New Rochelle Yard in Westchester, along with modernization of signal, power and communication infrastructure. This will consist of four new interlockings, five new substations, reconfiguration of the Pelham Bay interlocking and upgrade of two existing substations.

In September 2021, the Federal Transit Administration issued a Finding of No Significant Impact, allowing the project to proceed. On December 29, 2021, the MTA awarded the Design-Build contract to the joint venture of HalmarInternational, LLC and RailWorks.