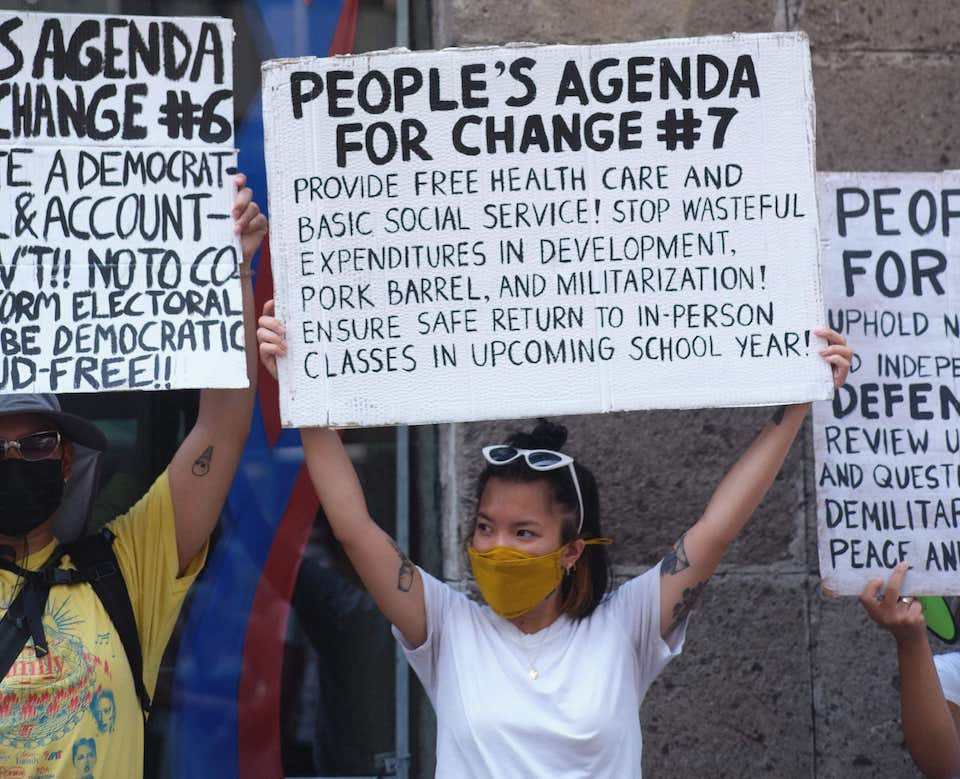 New York City – Ahead of the State of the Nation Address, 200 Philippine human rights defenders and advocates braved the heatwave to mount a protest action highlighting the actual state of the Filipino people. Today marks the namesake and former dictator’s son Ferdinand “Bongbong” Marcos, Jr.’s first month in office. The Northeast Coalition to Advance Genuine Democracy in the Philippines organized the People’s State of the Nation Address (PSONA) in front of the New York Philippine Consulate to counter President Marcos’s expected statements and to amplify the true situation of the Philippines.

The program was framed around the People’s Agenda for Change, a platform drafted by progressive groups in the Philippines that asserts policy priorities that address the roots of the Filipino people’s issues. As each speaker spoke about the realities of the Filipino people, the emcees read points from the People’s Agenda for Change to help explain what action steps are needed to address these systemic issues. A large banner that read “Economic Relief, Livelihood, and Rights! Not Corruption, Misinformation & Repression!” became the backdrop for speakers from various Filipino human rights and ally organizations.

At the height of his rise to power, Ferdinand Marcos, Sr. institutionalized the forced migration of Filipinos abroad through the 1974 Labor Export Policy (LEP) as an attempt to deal with the socioeconomic crisis in the Philippines. Almost 50 years later, Filipinos still pay the price of the worsening socioeconomic crisis with little to no relief while millions of dollars continue to be splurged on militarization and lavishness by the ruling elite. AJ Santos of Migrante USA Northeast recounts the parties that Marcos Jr. hosted for his victory and his mother’s birthday amidst a worsening economic crisis in the Philippines, with an inflation rate expected to hit 7%. “Habang patuloy ang pagtaas ng presyo ng bilihin at halos wala nang makain ang ordinaryong Pilipino, ang mga nasa posisyon ay nagpapakasasa sa mga binulsa nilang yaman na dapat ay napupunta sa serbisyo sa ating mga kababayan.” (While commodity prices continue to rise and ordinary Filipinos have almost nothing to eat, those in position indulge in the wealth they have pocketed that should be going to the service of our people.)

Nina Macapinlac, Deputy Secretary-General of BAYAN USA, pointed out how the Marcoses returned to power. “The Marcos family’s decades-long disinformation campaign was enabled through the alliances they forged with other political dynasties and reactionaries, enabled by a rotten political system that treats government as a business. This year is the 50th anniversary of Martial Law under Marcos Sr., and the Marcoses are back. It has been half a century since martial law enabled a dictatorship and that dictator’s son is back in power. Upsetting, painful, ironic. There are so many words that can be used to describe how this political moment feels.”

Other speakers elaborated on how the next six years of Marcos are already predictable based on what has unfolded so far. “Women and gender non-conforming people are forced out of the Philippines, work strenuous contractualized jobs or back-breaking labor in the farm fields as a means to pay off a lifetime of debt or for very little pay,” said Momo Manalang, vice-chairperson of GABRIELA New York. She spoke about the recent disappearance of long-time labor organizers Loi Magbanua and Ador Juat, peasant activist Cha Pampoza, and women’s rights defender Elgene Mungcal. “Theirs are the most recent case of enforced disappearance, a scheme that was widely employed during the Martial Law period under Ferdinand Marcos, Sr. and continues to this day under Ferdinand Marcos, Jr.; a practice of state forces defined in international law as a crime against humanity,” Manalang asserted. 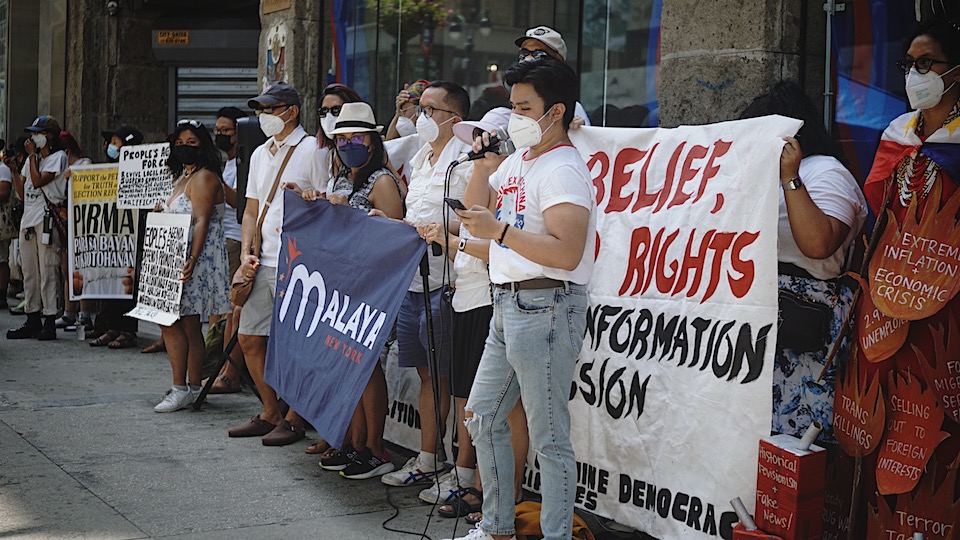 The protest used other creative mediums to describe the state of the Philippines. The group staged theatrical performances depicting the commuters’ struggles with rising prices and extrajudicial killings of suspected drug users perpetrated by the Philippine National Police and the Armed Forces of the Philippines during former President Duterte’s War on Drugs.

A living sculpture was created to symbolize the basic issues that the Philippines is engulfed in currently such as: disinformation; inflation; corrupt political dynasties; terror-tagging of human rights defenders; extra-judicial killings; and more. Kort Lee explained, “We have noticed the terror-tagging ramping up not only in the Philippines but also here in the United States against human rights defenders — like all of us here today. We also see Marcos as a tiny puppet of a gas can, spilling and fueling the fire. The United States has given over 1 billion USD in tax dollars towards the Philippine drug war.”

Remy Andrea of Anakbayan Philadelphia challenged the youth to evaluate what really matters to Marcos-Duterte based on their actions. “Sara Duterte wants the youth to forget our true history so that we can carry on the cultural imperialism that was imposed upon the Philippines under colonization,” Andrea concluded. “When you’ve survived hundreds of years of violence, of colonization, of imperialism and repression, you have the pride of knowing that you are still standing. We continue to fight, and that is the true spirit of the Filipino youth and it cannot be taken away.”

Throughout the program, speakers called on people to continue the struggle for justice and democracy. “We continue our organizing here in the heart of empire half a world away because we know that fascists like Rodrigo Duterte do not just appear out of thin air: they grow from seeds of colonialism and are cultivated by profit afforded to politicians, policymakers heavily swayed by the imperial project of the United States,” expressed Gabriel of Malaya New York. “I am here because I believe that speaking up and being heard is important, that for our people, for my Ilonggo and my Filipino, being alive is not just the quality of being free but also the will to set free all who are alive.”

The Northeast Coalition for Genuine Democracy in the Philippines was conceived during the campaign period of the 2022 national elections in the Philippines when an unprecedented unity of Filipinos across the globe emerged with the goal to defeat the “Marcos-Duterte tandem.” Martial Law survivors, human rights advocates, and historians were dismayed at the whitewashing of the Martial Law period of the Philippines’ history by the Marcos, Jr. campaign, as well as the rampant fraud that marred the polls. The coalition will continue to organize educational discussions and mass protests, especially as the 50th anniversary of dictator Ferdinand Marcos Sr.’s declaration of martial law approaches this September.