U and T visas allow undocumented immigrant victims of crime, human trafficking to remain in country during investigation and provide pathway to legal permanent residence 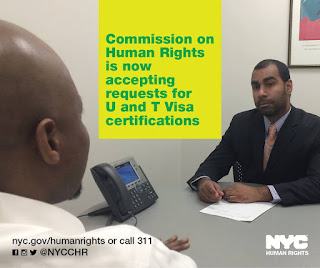 NEW YORK—Mayor Bill de Blasio and Commissioner and Chair of the New York City Commission on Human Rights Carmelyn P. Malalis announced that CCHR is now accepting requests for U and T visa certifications, making it the first and only anti-discrimination agency in a major U.S. city to provide the certification.
“All New Yorkers deserve fair, equal and just protection under the law,” said Mayor Bill de Blasio. “We must stand up for the rights of all our brothers and sisters, and make our city safer by encouraging collaboration and engendering trust between the police and community. I'm proud to announce that the NYC Commission on Human Rights will begin issuing U and T visa certifications – leading other organizations of its kind around the country in supporting undocumented immigrant victims of crime and helping to bring perpetrators to justice.”
“Immigrant New Yorkers should never have to fear negative immigration consequences for reporting crimes committed against them, especially survivors of human trafficking,” said Council Speaker Melissa Mark-Viverito. “Any expansion of U and T visa certifiers is a welcome addition that will give immigrant survivors of crime and human trafficking increased opportunity to come forward and obtain justice. Last year, the Council created a new initiative to provide services to human trafficking survivors in court, and we will continue to work with our partners in government to better serve them. With this announcement, our city is once again leading the nation in creating more compassionate and sensible immigration policy.”

Providing New Yorkers with greater access to U and T visa certifications is the de Blasio Administration’s most recent effort to protect and strengthen its immigrant communities while making the city safer by encouraging undocumented immigrants to report crimes that have often gone unreported due to fear of deportation. The U visa allows undocumented immigrant victims of crime to temporarily remain in the U.S. for up to four years while assisting law enforcement in investigations and prosecutions, and provides them with a chance to legally work, integrate into their communities and get on a pathway to lawful permanent residence. The T visa, which applies only to undocumented immigrants who have been trafficked into the United States, allows victims to remain in the U.S. for up to three years to assist in the investigations or prosecutions of trafficking crimes, and also provides a pathway to lawful permanent residence. Certification by a law enforcement agency is the first step in the visa process; applicants must submit their certification to the United States Citizenship and Immigration Services for approval to receive a visa.

“I’m really pleased by this news. It’s important that the NYC Commission on Human Rights pays attention to these cases, where immigrants like me are abused by employers or by others, and certify U visas,” said U visa applicant Enriqueta Luna. “I suffered sexual harassment and other types of abuse from my employer, and this happens to many others throughout the city. It’s important that our rights be protected, and that immigrants know that they can come forward when they suffer this type of abuse.”

“New York City strives to keep all its residents out of harm’s way regardless of their immigration status,” said Counsel to the Mayor Maya Wiley. “Far too often, undocumented immigrants do not report crimes for fear of deportation. But they should know that the law protects them just as it protects everyone else. They can now approach the NYC Commission on Human Rights to report crimes and assist law enforcement in investigations without thinking twice. I look forward to working with the Commission, City agencies and advocacy groups to further strengthen immigrant protections under the Law.”

“By issuing U and T visa certifications, the Commission provides another venue for undocumented immigrants to come forward, report unlawful activity and assist in investigations,” said NYC Commission on Human Rights Commissioner and Chair Carmelyn P. Malalis. “As a civil law enforcement agency with investigatory authority, the Commission is well-situated to identify crimes that may qualify immigrants for U and T visa certification, including sexual assault in the workplace, tenant harassment, forced labor, extortion and human trafficking. Everyone in New York City is protected under the New York City Human Rights Law, regardless of their immigration status. Issuing certification will bring victims of abuse one step closer to the justice they deserve.”

The Commission, like other U and T visa certifying agencies, is part of the interagency task force on U visas coordinated by the Mayor’s Offices of Immigrant Affairs and the Mayor's Office to Combat Domestic Violence. The task force convenes meetings with advocates and internally across agencies to coordinate on best practices and on outreach efforts to instill confidence among undocumented immigrant victims of crimes about a program that was designed to reduce crime and help families. Over the last few months, the Commission has focused on outreach to the City’s various immigrant communities through increased language access initiatives and targeted outreach, including by creating specific educational materials, hosting roundtables with community leaders, leading Know Your Rights workshops, and by developing partnerships with local community-based organizations serving immigrant communities across the five boroughs.

Roughly 11.3 million undocumented immigrants live in the United States, 535,000 of whom call New York City home. Due to their undocumented status, many immigrants do not report crimes such as domestic violence, sexual assault and human trafficking for fear of deportation. Congress created both the U and T visas in 2000 as part of the Victims of Trafficking and Violence Protection Act to encourage undocumented immigrants to come forward and report crimes, and to aid law enforcement in investigations and prosecutions of criminal activity.

The New York City Commission on Human Rights is a civil law enforcement agency that investigates and prosecutes a wide range of offenses under the New York City Human Rights Law. In the course of investigating discrimination complaints in housing, employment and public accommodations, the Commission may discover criminal activity that could qualify victims for a U or T visa, such as sexual harassment in the workplace that involves sexual assault, a landlord harassing a tenant to vacate the building by threatening to report them to the police (extortion), or an employer exploiting a worker under threat of deportation or other harm (trafficking).

According to USCIS, crimes that qualify for U visa certification include rape, torture, trafficking, incest, stalking, domestic violence, sexual assault, abusive sexual contact, prostitution, extortion and sexual exploitation, among others. The list of qualifying crimes is not exclusive and includes similar criminal activity depending on the jurisdiction. Crimes that qualify for T visa certification are limited to sex trafficking and labor trafficking.

“New York City announced that it has expanded its capacity to meet the needs of immigrant communities. U and T visas serve undocumented immigrants who have suffered abuse and encourage them to report the crime regardless of their immigration status. By providing an additional avenue for immigrants to report unlawful activity, the Commission is creating a more fostering environment for immigrant communities,” said Mayor’s Office of Immigrant Affairs Commissioner Nisha Agarwal.

“The Mayor’s Office to Combat Domestic Violence applauds Commissioner Malalis for expanding the agency’s scope of services to include U and T visa certifications for victims who are seeking legal remedies related to discrimination,” said Cecile Noel, Commissioner of the Mayor's Office to Combat Domestic Violence. “The Commission’s inclusion of U and T visa certification will allow victims in New York City to come forward and receive the assistance they need.”

Federal law allows federal, state and local law enforcement agencies – including agencies with civil enforcement power, prosecutors, judges and other authorities with law enforcement investigatory power – to issue U or T visa certifications. The New York City Commission on Human Rights is one such agency. Currently, similar city human rights agencies in the ten next largest U.S. cities do not provide U or T visa certification.
In order to obtain a U visa, a petitioner is required to provide USCIS with a certification from a law enforcement agency confirming that a qualifying crime has occurred and that the victim was helpful, is being helpful, or is likely to be helpful in the investigation. To obtain a T visa, victims have the option to submit a law enforcement agency endorsement that the individual was a victim of human trafficking. Certification is not required in the T visa process, but does give significant weight to the victim’s application. Certification of both the U and T visa does not automatically confer visa status. Only USCIS may issue a U or T visa.

If United States Citizenship and Immigration Services finds that the petitioner is eligible and approves the petition, a U visa recipient receives non-immigrant status to live and work in the U.S. for up to four years, and a T visa holder for up to three years. U and T visa holders may also apply to adjust status to become lawful permanent residents after three years of continuous presence in the U.S. Congress has capped the number of available U visas to 10,000 per fiscal year and T visas to 5,000.

Eligible victims of a qualifying crime may seek U visas derivative status for certain family members, including spouses, minor children and parents. Additionally, there is no statute of limitations for when a crime occurred or was reported and the signing of the U or T visa certification, nor does a crime have to be previously reported to qualify for certification.

The Commission will undergo rule-making to codify its certification protocol. The rule making process allows for transparency and clarity in the process and gives stakeholders and advocates the opportunity to weigh in on the proposed protocol. The Commission will also continue to work with the Mayor’s Offices of Immigrant Affairs, Mayor’s Office to Combat Domestic Violence, and the Mayor’s Office of Criminal Justice to develop protocols, best practices and outreach efforts to educate the city’s immigrant communities about the U and T visa certification process.