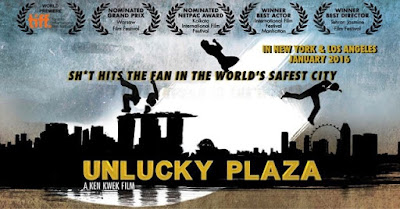 New York – A new film from Singapore director Ken Kwek, UNLUCKY PLAZA, will be making its US premiere when it opens January 8 at Cinema Village in NYC.

Filmed in Singapore, UNLUCKY PLAZA is the story of what happens to a business owner when a chance to save his ailing diner goes belly up and is pushed over the edge. He takes a motley group of citizens hostage in a designer bungalow and publicizes his act on YouTube. As the police and international media descend on the crime scene and riots break out in in the city, an increasingly desperate Onassis forces the situation to a violent, heart-stopping conclusion.

UNLUCKY PLAZA is unrated and has a running time of 122 minutes.