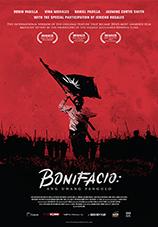 Cinetropa.com, the Filipino-movie streaming site based in the US, kicks off the New Year with the streaming of Bonifacio: Ang Unang Pangulo (International Version) in HD on January 26. The movie is also available to watch in other countries.

An official entry to the 2014 Metro Manila Film Festival (MMFF), the Robin Padilla-starrer won more than 20 awards, including Best Picture from the MMFF, FAMAS and the PMPC Star Awards as well as five Gawad Urian nominations. The producers, Tuko Film Productions and Buchi Boy Films, have since re-edited the film and created a more lucid and powerful international cut of the feature. Tuko Film Productions and Buchi Boy Films are also the same team behind last year’s critical and commercial hit, Heneral Luna.

Six other independent films are already streaming at cinetropa.com. These include two films by Clodualdo del Mundo Jr. (screenwriter of such classics as Maynila Sa Kuko ng Liwanag and Kisapmata) namely Pepot Artista and Paglipad ng Anghel (Flight of an Angel). Also available are the acclaimed LGBT documentary titled Jazz in Love, the Coco Martin-starrer Jay, the controversial feature MNL 143, and the award-winning fable, K’na The Dreamweaver, a heartrending love story set among the T’bolis.
Cinetropa is the only movie-streaming site in the market exclusively dedicated to Filipino films. Aside from independent titles, the site will soon showcase classic Filipino favorites. With a starting rate of USD$3.99 in the US and other countries, and PHP190 for Philippine-based viewers, film enthusiasts can now enjoy a wide range of Filipino movies in HD.
Unlike illegal and other streaming sites, Cinetropa is backed by Filipino independent producers and investors, with the purpose of providing local filmmakers more exposure for their films on a global scale both for Filipinos and non-Filipinos discovering or exploring Philippine cinema and culture.

Cinetropa offers a revenue-split model with Filipino filmmakers so they can sustain their passion for filmmaking and give them the leeway to make more films and reach out to more viewers anywhere in the world.

For more details and updates on upcoming movies, visit cinetropa.com. On Facebook, Cinetropa is at https://www.facebook.com/cinetropa/.
Posted by News Desk at 13:30