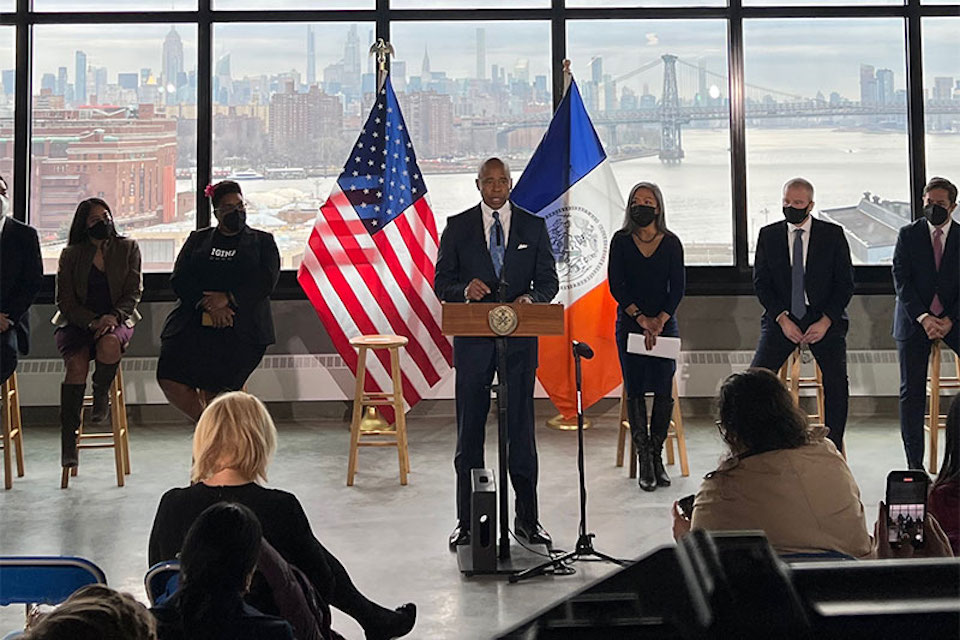 NEW YORK – New York City Mayor Eric Adams unveiled multiple new members of his economic development team at the Brooklyn Navy Yard. The team — which will be led by Deputy Mayor for Economic and Workforce Development Maria Torres-Springer — includes several new appointments, as well as a handful of previously announced appointments. Collectively, they will be focused on building an equitable recovery across all sectors of the city’s economy and bringing New York City back following COVID-19.

Andrew Kimball will serve as president and chief executive officer (CEO) of the New York City Economic Development Corporation (NYCEDC), Lindsay Greene will serve as CEO of the Brooklyn Navy Yard Development Corporation, Anne del Castillo will continue to serve as commissioner of the New York City Mayor’s Office of Media and Entertainment (MOME), and Clare Newman will continue to serve as president and CEO of The Trust for Governors Island.

“New York City is the economic engine of the nation and is going to lead this economic recovery, which is why we will need proven leaders who have a comprehensive understanding of the economic landscape of this city, and a track record of ‘Getting Stuff Done,’” said Mayor Adams. “Each member of this diverse group of individuals truly knows the communities they serve, and has the skills, the talent, and the emotional intelligence to shepherd an inclusive and equitable economic recovery for all New Yorkers. Appointing a team like this is how we bring back our city stronger than ever.”

At NYCEDC, Kimball will be responsible for delivering on the mayor’s economic development vision, creating good jobs in burgeoning fields, such as cybersecurity and life sciences, and creatively using the city’s assets to promote equitable growth. Kimball previously served as CEO of Industry City.

At the Brooklyn Navy Yard, Greene will be the first Black woman and the first openly LGBTQ+ person to serve in the role. As CEO, Greene will oversee the workforce development and urban manufacturing campus, which is home to more than 500 businesses and 11,000 employees. Greene will deepen and expand the Navy Yard’s mission, investing in the jobs of the future and creating pipelines for underserved communities to fill these jobs. Greene previously served as chief strategy officer of the NYCEDC.

At MOME, del Castillo will be a crucial partner for the city’s creative economy, from the film sector to the nightlife industry. She will also work with partners in and out of government to aid its recovery, as it was disproportionately impacted by the pandemic. Del Castillo was first appointed as commissioner in 2019.

As president and CEO of The Trust for Governors Island, Newman will build on the remarkable transformation of the island as a world-class public space, with a focus on ensuring all New Yorkers can enjoy the cultural, programmatic, and natural treasures the island has to offer.

“Under Mayor Adams’ leadership, we are fighting every day to drive a recovery for all New Yorkers,” said Deputy Mayor Torres-Springer. “That is why I am so thrilled that we are appointing visionary leaders like Andrew Kimball, Lindsay Greene, Anne del Castillo, and Clare Newman, whose depth of expertise is matched only by their commitment to New York City bouncing back better than before, with a stronger, more equitable, and more resilient economy.”

“I am honored to be re-appointed by Mayor Adams to continue the important work of recovering and strengthening New York City’s media, entertainment, and nightlife sectors,” said MOME Commissioner Anne del Castillo. “These industries are vital to our vibrant culture and economy — generating $150 billion and 500,000 jobs pre-pandemic — and define our city as a global capital.”

About Anne del Castillo
Anne del Castillo is commissioner of MOME. Del Castillo holds more than 25 years of experience in film and TV production, public media, arts, and nonprofit administration. Since her appointment in 2019, Commissioner del Castillo has focused on bolstering New York City’s world-class arts, entertainment, and nightlife sectors and advanced an economy that works for all New Yorkers.

Prior to her appointment, Commissioner del Castillo served as director of Legal Affairs and then chief operating officer and general counsel of MOME. Since joining the agency in 2014, she has guided the development of numerous initiatives, including Broadway/Off-Broadway in the Boros to bring free live performances to the five boroughs; New York Music Month to provide resources, workshops, and seminars for New York City musicians and industry professionals at various stages in their careers; the Freelancers Hub to create a central resource hub for freelance workers in the creative industries; the New York City Women’s Fund for Media, Music and Theatre; a series of training and educational programs to increase diversity in film and television, theater, music production, and animation; and a deal with Berklee NYC to save the iconic Power Station recording studios.

She holds a BA in English Literature and a BS in Mass Communications from Boston University, and a JD from Brooklyn Law School. A native New Yorker, she grew up in Stuyvesant Town, where she is raising her son.