'Make Your Mark' Celebrating a Decade of Solving Hunger and Malnutrition; Advancement for Rural Kids' NYC Gala on Nov 15 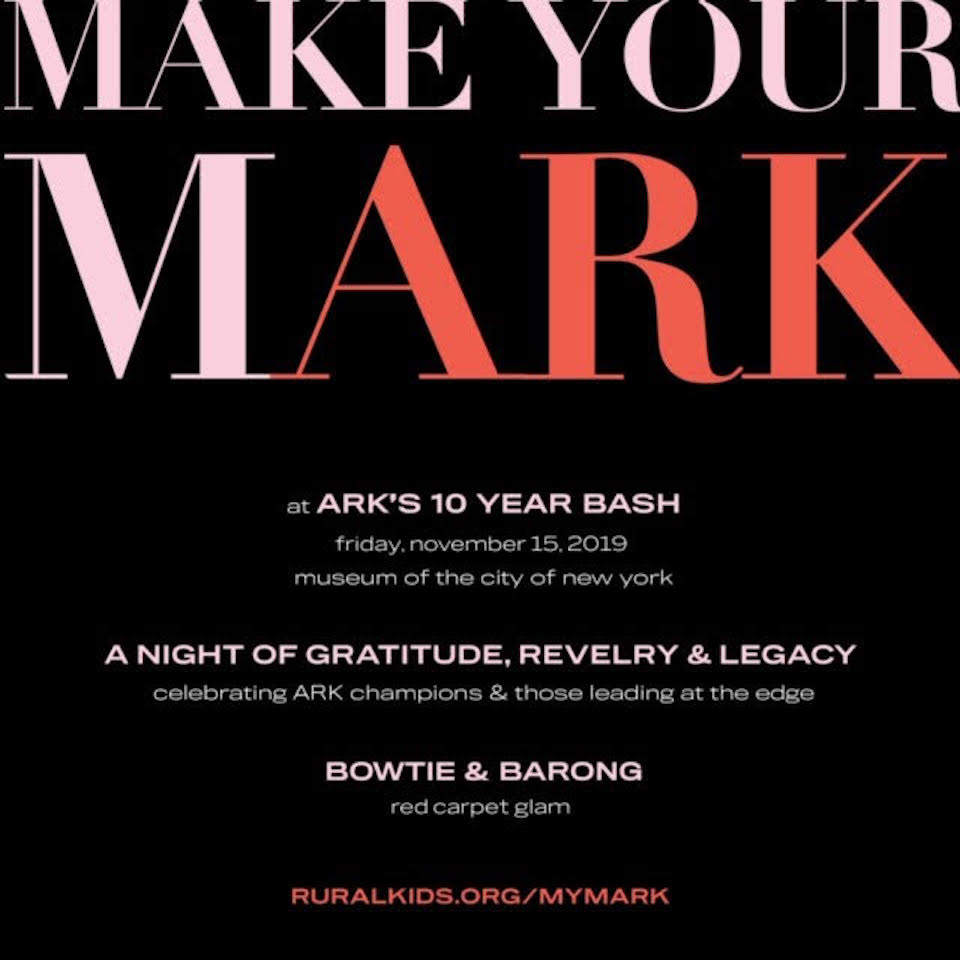 NYC based Advancement for Rural Kids (ARK) is celebrating its 10th year with ‘Make Your Mark’, a bowtie/ barong dinner benefit and party on November 15, 2019 at the Museum of the City of New York. ARK partners with rural communities in the Philippines and the developing world on a 5-cent school lunch program that solves hunger and malnutrition, gets kids back to school and enables communities to be self-sustaining in just 3 years.

At #MakeYourMark, ARK will celebrate the 'ARK Lunch' program for being the only one in the world that is not a hand-out, and that parents contribute to from day one and fully fund on their own after 3 years. ARK will showcase its partner community, Agsilab, located in Capiz, Philippines, that is in its 4th year of the ARK Lunch program and this community is now funding it all on their own. They are inspiring other partners who are in their first, second and third years of the ARK Lunch program as well as four communities in Sierra Leone who created gardens and their own self-funded school lunch using ARK’s DIY toolkit.

ARK will honor ARK Champions like Google’s Regina Manzana-Swahney; Filipino-American leadership collective UniPro who are engaging and unifying Filipinos and Filipino Americans on a platform for dialogue and growth; as well as the legacy of NBA Hall of Famer Michael Goldberg who has contributed greatly to ARK. ARK will also feature Commissioner Anne del Castillo who leads NYC’s Mayor’s Office of Media and Entertainment for creating paths for diverse voices, art work and representation in New York.

In its 10th year and with 16 partner communities, ARK has served close to a million lunches, got 5,000+ kids back to school and provided scholarships to 200+ kids to advance to high school and college. The ARK Lunch, an innovation born in the Philippines, is now leading the international development and social impact realm with its catalyst (not colonial) and co-investment
approach. ARK’s dream is to have the Philippines be the platform and incubator of social innovations that can be replicated in other parts of the Global South and applied back to the Global North. At #MakeYourMark, ARK will raise the seed funding to partner with 45 communities who will lead other communities in the Philippines and beyond to build a self-sustaining future.