In New York, Filipinos Protest Crackdown on Activists, Demand Freedom of Over 60 Arrested in the Philippines 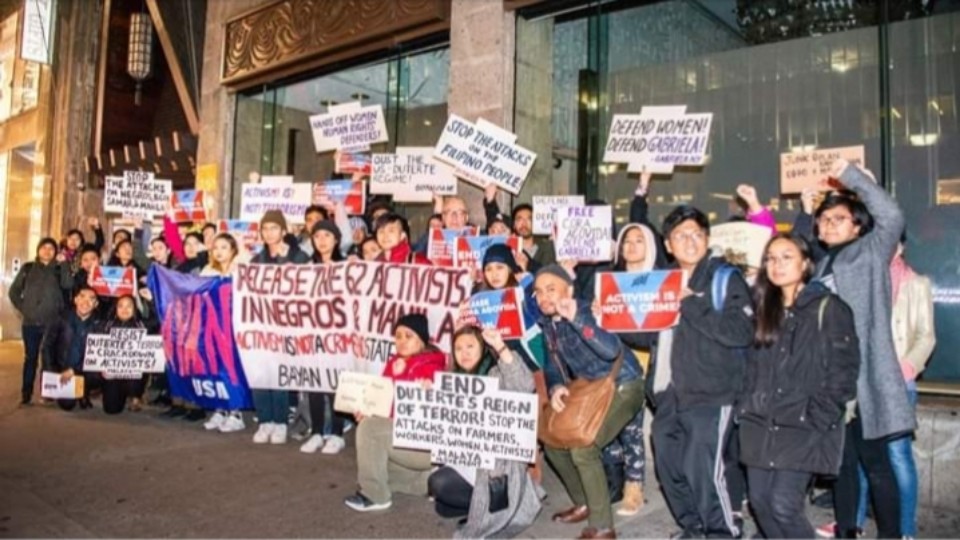 NEW YORK — Filipinos and their allies gathered outside the Consulate General of the Philippines in Manhattan for an emergency rally to condemn the recent spate of mass arrests and raids against activists in the Philippines as part of Duterte’s intensifying crackdown on critics of his administration.

Led by BAYAN USA Northeast, more than 50 people mobilized with banners that read “Release the 62 Activists in Negros & Manila” and held placards declaring “Activism is Not a Crime!” The protesters decried the raids of regional offices of GABRIELA, Bayan Muna Partylist, BAYAN Metro Manila and the National Federation of Sugar Workers (NFSW), as well as the mass arrest of over 60 people in Bacolod City, Negros Occidental and Metro Manila.

The coordinated attacks on progressive organizations were implemented by combined state forces with elements of the Armed Forces of the Philippines (AFP), Philippine National Police (PNP), Special Weapons and Tactics (SWAT) and Criminal Investigation and Detection Group (CIDG). Protesters called out the attacks as part of Duterte’s Oplan Kapanatagan, a counterinsurgency program that utilizes a “whole-of nation” approach that does not distinguish between combatants and civilians, and weaponizes the entire civilian bureaucracy to demonize and quell resistance.

“Under the guise of a ‘rescue,’ state forces took the two-year-old and ten-year-old children of two leaders in GABRIELA and KADAMAY into the custody of the Department of Social Welfare and Development (DSWD) during recent raids,” said Michael Tan of Anakbayan New York. “However this ‘rescue’ fails to recognize what we need to be rescued from. We do not need to be rescued from activists who are unafraid to speak the truth about the current conditions in the Philippines. We need to be rescued from the state that is quick and willing to spread lies and incite violence on youth for speaking out against state violence.”

The protest highlighted the community organizing work of the National Democratic organizations under attack and the existential threat they pose to the dictatorial regime. “Duterte is scared of GABRIELA, which has defended and fought for women for 35 years,” said Michelle Thiele of GABRIELA NY. “As a grassroots organization, we have always stood with people abroad and in the Philippines, especially women.”

“We sued Duterte for his misogyny and violation of women's rights, and submitted the guilty verdict to the International Criminal Court,” Thiele continued. “We protest against his TRAIN law, which raised prices on basic necessities like rice. We condemn the government’s labor export policy and speak out against his corrupt drug war. We’re not scared of cowards who point guns at children and conduct raids in the middle of the night!”

The organizers called for a continuation of the struggle for national liberation and genuine democracy in the face of these attacks. “We must be clear that this is a concerted, deliberate and desperate attack to quell the National Democractic movement with a socialist perspective,” said Nina Macapinlac of BAYAN USA. “The movement for National Democracy has been the most united and formidable political force in the Philippines for more than half a century. Our National Democratic mass organizations and formations like BAYAN and GABRIELA are being raided and terrorized for providing real solutions to the problems of people living in poverty and an alternative to a system that has only produced puppet presidents like Marcos, Arroyo and Duterte. We are a continuation of the Philippine Revolution of 1896 and we will not back down any time soon.”