What is happening in Cotabato and vicinity?

At 09:04 AM Philippine Standard Time (PST) of 29 October 2019 (Tuesday), another strong earthquake of Magnitude (M) 6.6 shook the province of Cotabato (also known as North Cotabato) and vicinity. This earthquake has an epicenter located 25 kilometers southeast of Tulunan, Cotabato, and a depth of 7 kilometers. This earthquake, as well as the recent earthquakes (9 July 2019 M5.6 and 16 October 2019 M6.3) in the area, are part of a sequence of events from interrelated faults in the region. Small to strong magnitude earthquakes followed afterwards, and as of 3:00 PM PST of 29 October 2019, 113 earthquakes following the M6.6 earthquake have been recorded by the DOST-PHIVOLCS.

Using the PHIVOLCS Earthquake Intensity Scale (PEIS), the ground shaking based on preliminary intensity reports are summarized below. 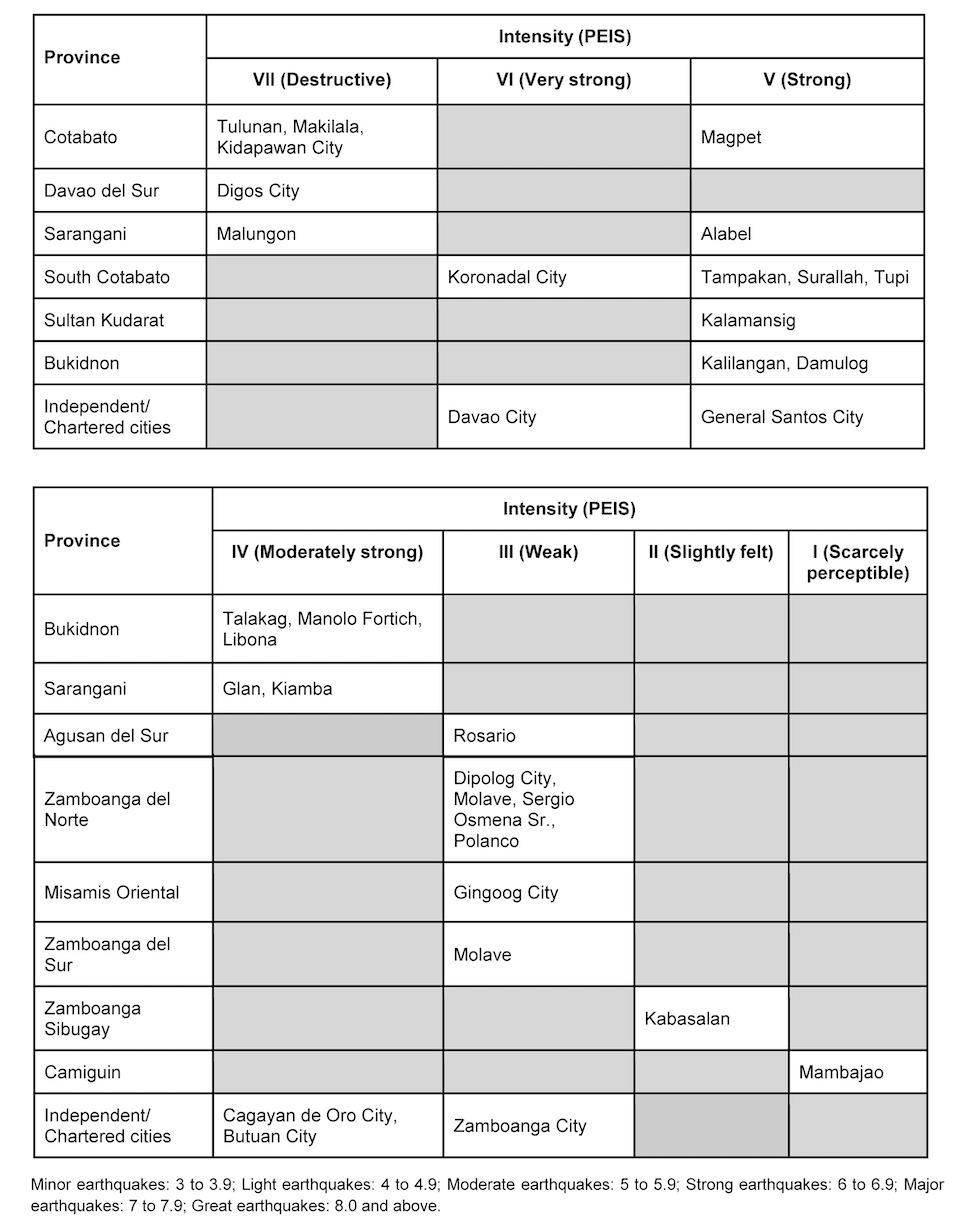 Have major to moderate magnitude earthquakes affected Cotabato in the past?

The most recent earthquake events that affected Cotabato are the 9 July 2019 M5.6 and the 16 October 2019 M6.3 earthquakes. The maximum intensity of the M6.3 event was felt at PEIS VII in Tulunan, M'lang, Makilala, and Kidapawan City in Cotabato, Bansalan, Digos City, Hagonoy, Magsaysay, and Matanao in Davao del Sur, and some portions in Columbio in Sultan Kudarat. This earthquake was felt as far as 300 kilometers away from the epicenter.

At least four onshore earthquakes ranging from M5.0 to M7.5 occurred in Cotabato and vicinity from 1924 to present based on the PHIVOLCS Earthquake Catalog and the report by the Southeast Asia Association of Seismology and Earthquake Engineering (SEASEE). Small- to moderate-magnitude earthquake swarms were also recorded in April to May 1993, and August 2007.

Why do earthquakes occur in Cotabato?

Central Mindanao (SOCCSKSARGEN Region), which includes Cotabato, is one of the seismically active regions in the country because of the presence of several active faults in the area which include the M’lang Fault, Makilala-Malungon Fault, North Columbio Fault, South Columbio Fault, and the western extension of the Mindanao Fault (Cotabato-Sindangan Fault). Cotabato Trench is also a major source of earthquakes which can affect the region. In addition, there are other nearby local faults, some of which may be covered by recent deposits, and could be sources of small to strong magnitude earthquakes.

Can this earthquake indicate volcanic activity?

No. Although the nearest active volcanoes from the epicenter are Matutum Volcano (~46 km) and Parker Volcano (~76 km), the M6.6 event and succeeding earthquakes are tectonic in origin. However, as part of DOST-PHIVOLCS monitoring procedures for moderate to large earthquakes occurring near active volcanoes, the Institute will closely monitor earthquake events in relation to any activity that may be associated with Matutum and Parker Volcanoes.

What can we expect from the current earthquake activity?

We expect small- to moderate-magnitude earthquakes to occur in the epicentral area which may continue for several days to weeks, some of which may be felt. Although the occurrence of another earthquake higher than M6.6 cannot be discounted, the possibility of it coming from the same source area is low.

Aside from strong ground shaking, what other seismic hazards are life-threatening?

Landslides, rock falls, and other types of mass movements may occur on mountainous or hilly areas. Liquefaction, manifested by subsidence, sand boils or lateral spreads may affect low-lying, water-saturated and sandy areas often near banks and shorelines. Offshore large shallow earthquakes may generate tsunami waves that may inundate nearby shorelines.

Can this recent earthquake event trigger a destructive tsunami?

No. The epicenter of the earthquake is inland. Cotabato is also landlocked, hence it is safe from tsunami. Based on the current Active Faults and Trenches Map of PHIVOLCS, the tsunami threat for Sultan Kudarat, Sarangani and adjacent coastal areas in the SOCCSKSARGEN Region would come from the movement of the Cotabato Trench, located west of this region. Also, the tsunami threat for Davao Region would come from the movement of the Philippine Trench or other offshore active faults, located east of this region. Other sources of tsunamis which may affect the coastal communities of southern Mindanao would come from movement of the Sangihe, Halmahera and North Sulawesi Trenches located farther south offshore of Mindanao.

What should be done by the affected communities?

People are reminded to be cautious of structures visibly weakened or with signs of damage caused by the 16 October 2019 M6.3 and the 29 October 2019 M6.6 earthquakes, as these may be further damaged by succeeding earthquakes. In case of houses and other buildings with visible damage, it is best to contact the City/Municipal Engineering Office for advice.

Civil engineers from the local government, other agencies and organizations are strongly advised to inspect buildings and infrastructures to determine their integrity, and recommend appropriate actions to the affected groups or individuals. Affected buildings should not be reoccupied unless certified safe by these engineers.

Slopes should be checked for tension/incipient cracks that may have resulted from the strong ground shaking. Tension cracks may render slopes more susceptible to landslides. Areas that may be potentially affected should be avoided.

The best course of action is preparedness. In case of another strongly felt earthquake, it is recommended that people protect themselves by doing the “drop, cover and hold.” In homes and offices, heavy furniture should be strapped to the walls, hanging objects be securely fastened, and appliances be secured to prevent them from toppling and causing injuries to persons.

During these events, rumors claiming to predict an earthquake, tsunami or volcanic activity are easily spread that may cause panic. Please avoid sharing messages from unconfirmed and unreliable sources. Always verify information with authorities.

What is the role of DOST-PHIVOLCS?

Please visit our website at www.phivolcs.dost.gov.ph, and our Facebook (/PHIVOLCS) and Twitter (@phivolcs_dost) accounts for earthquake bulletins, volcano updates, hazard maps, and other information on earthquakes and volcanoes. Earthquake observations may also be reported to DOST-PHIVOLCS at telephone numbers (+63 2) 8929-9254 and (+63 2) 8426-1468 to 79, local 307 and 308.