Suspect Now in Custody after Shootout with Linden, NJ Police. 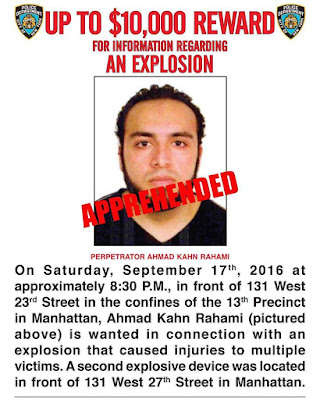 The FBI and NYPD are asking for assistance in locating Ahmad Khan Rahami.  Rahami is wanted for questioning in connection with an explosion that occurred on September 17, 2016, at approximately 8:30 p.m. in the vicinity of 135 West 23rd Street, New York, New York.

Rahami is a 28-year-old United States citizen of Afghan descent born on January 23, 1988, in Afghanistan.  His last known address was in Elizabeth, New Jersey.  He is about 5’ 6” tall and weighs approximately 200 pounds. Rahami has brown hair, brown eyes, and brown facial hair.