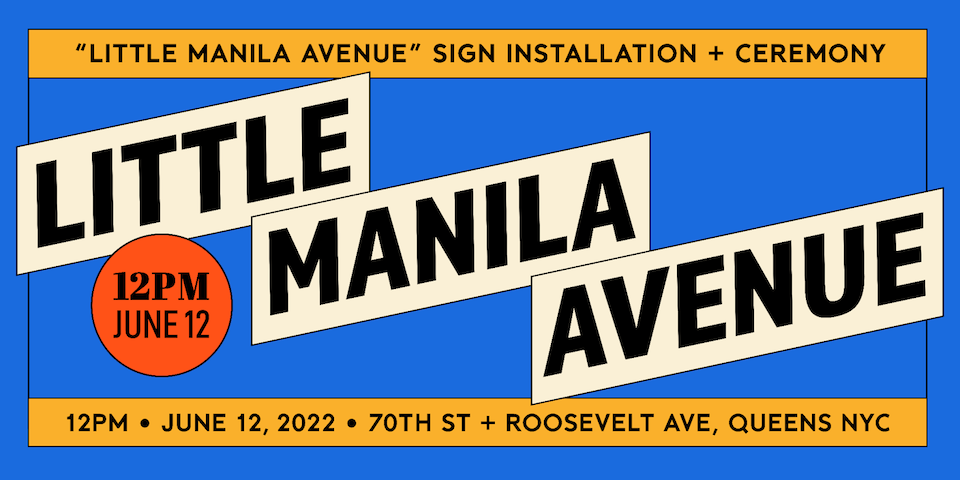 Woodside Queens, NYC - On June 12, 2022 from 12 - 1:30pm, the Filipino Community will be celebrating more than “Independence.” This June 12th marks the 124th anniversary of Philippine Independence from Spain but will also mark the first year of Roosevelt Avenue and 70th Streets being co-named Little Manila Avenue.

The effort to co-name this stretch of Roosevelt Avenue is organized by Phil-Am Food Mart, the National Alliance for Filipino Concerns, the Filipino American National Historical Society-Metro NY and Little Manila Queens Bayanihan Arts. The campaign to install a Little Manila Avenue sign was launched in the summer of 2020, and was confirmed by the New York City Council in December 2021.

Filipinos have been in NYC since the early 1900s and possibly before. The 1903 Pensionado Act, meant to quell Filipino opposition following the Philippine-American War, also intended to expose Filipinos to American values. During this time Filipinos came to the U.S for higher education with some deciding to stay and reside in Brooklyn.

Larger numbers of Filipinos came to NYC in the late 1960s and 1970s after the quota was dropped from the Immigration and Nationality Act of 1965.  Filipinos came to fill the demand for doctors, nurses, accountants, architects, engineers and teachers. With Filipino healthcare workers recruited to work at Elmhurst Hospital, many Filipinos relocated to the surrounding area, including Woodside. The block between 69th and 70th Street on Roosevelt Avenue has the highest concentration of Filipino businesses and restaurants, and remains that way today with the Filipino grocery, Phil-Am Food Mart, in continuous operation since 1976.

With Roosevelt Avenue being formally co-named, the impact and influence of Filipinos on the neighborhood is being recognized but also validates the need for further government support of small business, care workers and grassroots community-oriented organizations. Please join us as we unveil the street sign for a celebratory event at 12PM on June 12th at 70th Street and Roosevelt Avenue.