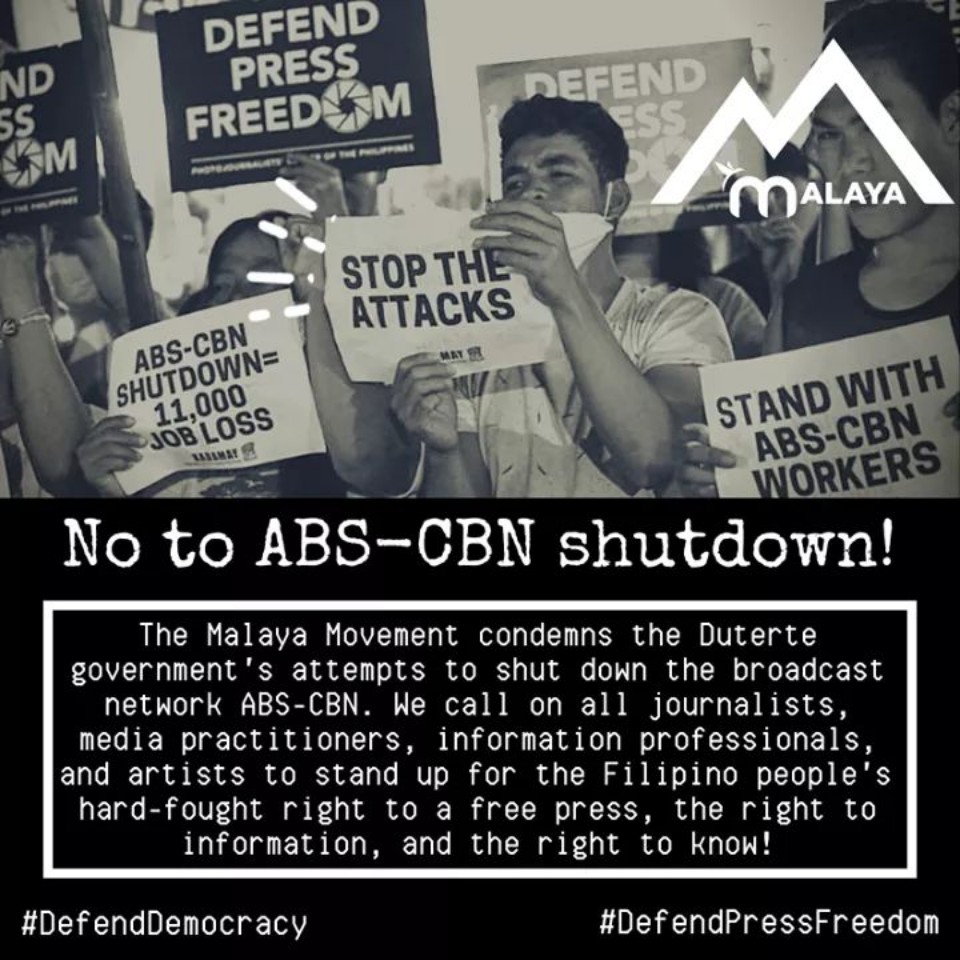 The Malaya Movement strongly condemns the Duterte government’s latest attempt to shut down ABS-CBN, the Philippines’ largest media broadcast network. Under orders of President Rodrigo Duterte, Solicitor General Jose Calida issued a ‘quo warranto’ petition to the Supreme Court to formally revoke ABS-CBN’s franchise weeks before it lapses. This latest move is an assault on press freedom and the Filipino people’s constitutionally protected right to freedom of expression. It is also an attack on nearly 11,000 workers whose main source of livelihood will be affected.

Duterte regime’s attack on ABS-CBN represents the most recent of a myriad of assaults on the freedom of the press amidst three years of the unleashing a spew of fake news in the public sphere, the tokhang-style killing of journalists, red-tagging and launching cyber attacks on progressive media outlets, and the multiple arrests of Rappler CEO and Time Magazine Person of the Year, journalist Maria Ressa. These attacks are about silencing critical voices in the media and opposition, as much as it is about encroaching on public access to information and the Filipino people’s right to the truth. To put it clearly: it is censorship.

Like the deposed fascist dictator Ferdinand Marcos, Duterte has made it clear that he will continue to intimidate the media and resort to violence in order to maintain his fascist rule. It will take no less than people power to once again end yet another dictatorship.

To defend press freedom is to defend our democracy, especially now as the Duterte government fails to address the needs of the Filipino people during the natural disasters and medical emergencies that the country is currently facing.

We, members of Malaya Movement Northeast, call on our Kababayans to stand with all ABS-CBN and all Filipino journalists, artists, media workers, TV and radio broadcasting industry to defend and fight for the protection and sanctity of the Filipino peoples universal and constitutional right to freedom of speech, expression, and of the press. We must unite to fight against any effort of the state that results in the curtailment of free speech and the right to information.

We also stand in solidarity with the nearly 11,000 ABS-CBN employees at home and abroad whose work is at risk due to the shutdown.