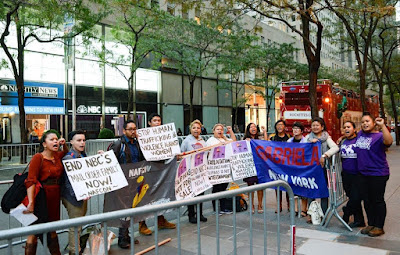 New York -  Protesters from the Filipino American community and their supporters gathered outside NBC's New York office at Rockefeller center last Thursday, October 6th, to highlight the increasing concern over NBC’s new project “Mail Order Family” that will no longer be developed as reported by NBC News, following criticisms from the Asian American community. An online petition against the show was also started by Gabriela USA (a grassroots-based alliance of more than 200 organizations advocating for Filipino women).

The show’s supposedly light-hearted story, centers around a widower who decides to purchase a mail order bride from the Philippines to raise his two children. By turning the situation into a comedy sitcom, the show normalizes the human trafficking that runs rampant in the Philippines and the specific exploitation of Filipino women.

According to Jennine Ventura, Deputy Secretary General of Internal Affairs, GABRIELA USA, “This project was supposedly based on the family of writer-producer Jackie Clarke. She has stated that it was her intention to ‘subvert the stereotype’ and NBC maintained that the pitch was about ‘the creator’s...strong Filipina stepmother.’ This exemplifies the astounding ignorance on the part of NBC, Clarke and the other producers of this show. Creating this show would trivialize and satirize the real life experiences of thousands of Filipina women who are forced to leave their own families and migrate overseas every day - facing exploitation, discrimination, abuse, violence, and even death - just to survive and provide a livelihood.”

“The issue of mail order brides represents the dire poverty, landlessness and horrific economic conditions that plague Filipino people daily. Such conditions are the result of constant economic plundering in the Philippines and unfair trade agreements from various foreign corporations including those based here in the United States,” stated Zarah Vinola, Secretary of Community Affairs, National Alliance for Filipino Concerns (NAFCON). “The mail order bride industry involves the buying of people, and the buying of people is slavery!”

There has been a long history of discrimination and violence against Filipino women in the United States as a result of the mail order bride industry. Susana Blackwell, a Filipina mail-order bride was shot and killed at point blank range along with two of her Filipina friends by her abusive husband at a divorce proceeding in 1995 in Seattle. Eighteen year old Emelita Villa Reeves, a Filipina mail-order bride in Texas, was brutally murdered by her American husband in 1992. Investigations discovered he had two previous mail-order brides who died of mysterious causes and one who disappeared.
​
In a statement, NBC referenced that the pitch was purchased with the understanding that it was based on a real life experience and that the station does not plan to move forward with the project “at this time.” While recognizing the project is temporarily suspended, GABRIELA USA remains vigilant in bringing the plight of Filipino women to the forefront and demands that NBC: 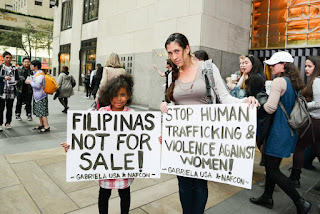 1) Issues a public apology;
2) Commits to the absolute cancellation of the project;
3) Agrees to a meeting, including network executives and producers of “Mail Order Family,” to educate them about the concrete conditions that Filipino women face;
4) Allows airtime to inform the public about the actual situation of Filipino women; and
5) Ensures that concepts of future shows are rigorously vetted to make certain that they are not culturally insensitive or offensive.