Ms. Loida Nicolas Lewis, lawyer, philanthropist and West Philippine Sea advocate lead the community in a victory rally across the United Nations headquarters on the day the Permanent Court of Arbitration made public its decision on, The South China Sea Arbitration. July 12, 2016. New York. 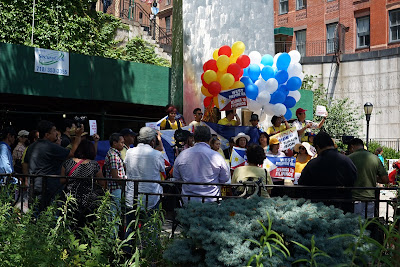 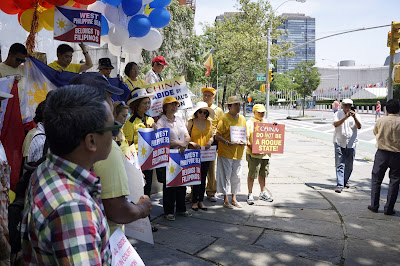 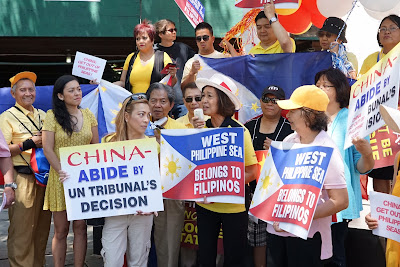 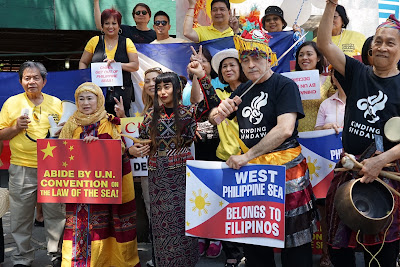 THE SOUTH CHINA SEA ARBITRATION
(THE REPUBLIC OF THE PHILIPPINES V. THE PEOPLE’S REPUBLIC OF CHINA)

The Tribunal Renders Its Award

A unanimous Award has been issued today by the Tribunal constituted under Annex VII to the United Nations Convention on the Law of the Sea (the “Convention”) in the arbitration instituted by the Republic of the Philippines against the People’s Republic of China.

This arbitration concerned the role of historic rights and the source of maritime entitlements in the South China Sea, the status of certain maritime features and the maritime entitlements they are capable of generating, and the lawfulness of certain actions by China that were alleged by the Philippines to violate the Convention. In light of limitations on compulsory dispute settlement under the Convention, the Tribunal has emphasized that it does not rule on any question of sovereignty over land territory and does not delimit any boundary between the Parties.

China has repeatedly stated that “it will neither accept nor participate in the arbitration unilaterally initiated by the Philippines.” Annex VII, however, provides that the “[a]bsence of a party or failure of a party to defend its case shall not constitute a bar to the proceedings.” Annex VII also provides that, in the event that a party does not participate in the proceedings, a tribunal “must satisfy itself not only that it has jurisdiction over the dispute but also that the claim is well founded in fact and law.” Accordingly, throughout these proceedings, the Tribunal has taken steps to test the accuracy of the Philippines’ claims, including by requesting further written submissions from the Philippines, by questioning the Philippines both prior to and during two hearings, by appointing independent experts to report to the Tribunal on technical matters, and by obtaining historical evidence concerning features in the South China Sea and providing it to the Parties for comment.

China has also made clear—through the publication of a Position Paper in December 2014 and in other official statements—that, in its view, the Tribunal lacks jurisdiction in this matter. Article 288 of the Convention provides that: “In the event of a dispute as to whether a court or tribunal has jurisdiction, the matter shall be settled by decision of that court or tribunal.” Accordingly, the Tribunal convened a hearing on jurisdiction and admissibility in July 2015 and rendered an Award on Jurisdiction and Admissibility on 29 October 2015, deciding some issues of jurisdiction and deferring others for further consideration. The Tribunal then convened a hearing on the merits from 24 to 30 November 2015.

The Award of today’s date addresses the issues of jurisdiction not decided in the Award on Jurisdiction and Admissibility and the merits of the Philippines’ claims over which the Tribunal has jurisdiction. The Award is final and binding, as set out in Article 296 of the Convention and Article 11 of Annex VII.

Historic Rights and the ‘Nine-Dash Line’: The Tribunal found that it has jurisdiction to consider the Parties’ dispute concerning historic rights and the source of maritime entitlements in the South China Sea. On the merits, the Tribunal concluded that the Convention comprehensively allocates rights to maritime areas and that protections for pre-existing rights to resources were considered, but not adopted in the Convention. Accordingly, the Tribunal concluded that, to the extent China had historic rights to resources in the waters of the South China Sea, such rights were extinguished to the extent they were incompatible with the exclusive economic zones provided for in the Convention. The Tribunal also noted that, althoughChinese navigators and fishermen, as well as those of other States, had historically made use of the islands in the South China Sea, there was no evidence that China had historically exercised exclusive control over the waters or their resources. The Tribunal concluded that there was no legal basis for China to claim historic rights to resources within the sea areas falling within the ‘nine-dash line’.

Status of Features: The Tribunal next considered entitlements to maritime areas and the status of features. The Tribunal first undertook an evaluation of whether certain reefs claimed by China are above water at high tide. Features that are above water at high tide generate an entitlement to at least a 12 nautical mile territorial sea, whereas features that are submerged at high tide do not. The Tribunal noted that the reefs have been heavily modified by land reclamation and construction, recalled that the Convention classifies features on their natural condition, and relied on historical materials in evaluating the features. The Tribunal then considered whether any of the features claimed by China could generate maritime zones beyond 12 nautical miles. Under the Convention, islands generate an exclusive economic zone of 200 nautical miles and a continental shelf, but “[r]ocks which cannot sustain human habitation or economic life of their own shall have no exclusive economic zone or continental shelf.” The Tribunal concluded that this provision depends upon the objective capacity of a feature, in its natural condition, to sustain either a stable community of people or economic activity that is not dependent on outside resources or purely extractive in nature. The Tribunal noted that the current presence of official personnel on many of the features is dependent on outside support and not reflective of the capacity of the features. The Tribunal found historical evidence to be more relevant and noted that the Spratly Islands were historically used by small groups of fishermen and that several Japanese fishing and guano mining enterprises were attempted. The Tribunal concluded that such transient use does not constitute inhabitation by a stable community and that all of the historical economic activity had been extractive. Accordingly, the Tribunal concluded that none of the Spratly Islands is capable of generating extended maritime zones. The Tribunal also held that the Spratly Islands cannot generate maritime zones collectively as a unit. Having found that none of the features claimed by China was capable of generating an exclusive economic zone, the Tribunal found that it could—without delimiting a boundary—declare that certain sea areas are within the exclusive economic zone of the Philippines, because those areas are not overlapped by any possible entitlement of China.

Lawfulness of Chinese Actions: The Tribunal next considered the lawfulness of Chinese actions in the South China Sea. Having found that certain areas are within the exclusive economic zone of the Philippines, the Tribunal found that China had violated the Philippines’ sovereign rights in its exclusive economic zone by (a) interfering with Philippine fishing and petroleum exploration, (b) constructing artificial islands and (c) failing to prevent Chinese fishermen from fishing in the zone. The Tribunal also held that fishermen from the Philippines (like those from China) had traditional fishing rights at Scarborough Shoal and that China had interfered with these rights in restricting access. The Tribunal further held that Chinese law enforcement vessels had unlawfully created a serious risk of collision when they physically obstructed Philippine vessels.

Harm to Marine Environment: The Tribunal considered the effect on the marine environment of China’s recent large-scale land reclamation and construction of artificial islands at seven features in the Spratly Islands and found that China had caused severe harm to the coral reef environment and violated its obligation to preserve and protect fragile ecosystems and the habitat of depleted, threatened, or endangered species. The Tribunal also found that Chinese authorities were aware that Chinese fishermen have harvested endangered sea turtles, coral, and giant clams on a substantial scale in the South China Sea (using methods that inflict severe damage on the coral reef environment) and had not fulfilled their obligations to stop such activities.

Aggravation of Dispute: Finally, the Tribunal considered whether China’s actions since the commencement of the arbitration had aggravated the dispute between the Parties. The Tribunal found that it lacked jurisdiction to consider the implications of a stand-off between Philippine marines and Chinese naval and law enforcement vessels at Second Thomas Shoal, holding that this dispute involved military activities and was therefore excluded from compulsory settlement. The Tribunal found, however, that China’s recent large-scale land reclamation and construction of artificial islands was incompatible with the obligations on a State during dispute resolution proceedings, insofar as China has inflicted irreparable harm to the marine environment, built a large artificial island in the Philippines’ exclusive economic zone, and destroyed evidence of the natural condition of features in the South China Sea that formed part of the Parties’ dispute.

The Press Release with an expanded summary of the Tribunal’s decisions can be viewed here.
Posted by News Desk at 18:09