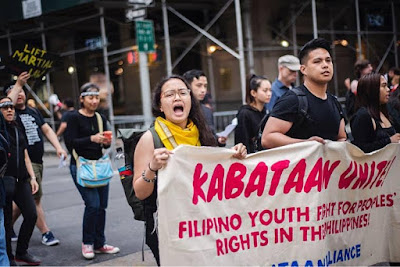 New York, NY - On June 3, Kabataan Alliance joined Malaya Movement’s march for human rights and democracy at the Philippine Independence Day Parade in New York City. The annual parade aims to celebrate the 120th anniversary of the independence of the Philippines from Spain.  But in a time when human rights are being violated, impunity reigns, and democracy has been stripped from us, how can we truly celebrate our independence and call ourselves free? 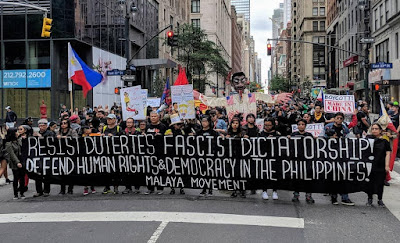 Kabataan Alliance joined the march to condemn Duterte’s de facto dictatorship and the vicious wars he is waging against the people and the youth. Alongside more than 400 people in Malaya’s contingent, Kabataan Alliance participated in a die-in in front of the parade organizers and Philippine government officials to symbolize the more than 20,000 deaths, including those of youth between the ages of 5 and 17, as a result of Duterte’s War on Drugs.

Because it is easy nowadays to hide social media posts or change channels to avoid the news, we wanted make a bold statement that this is the reality of our kababayan back home in the Philippines and that they cannot turn their eyes away from that reality. 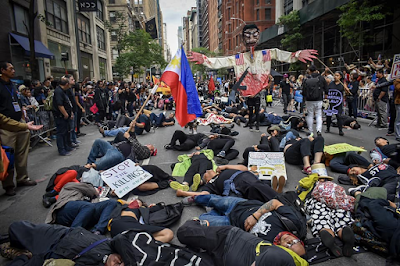 In addition to Duterte’s Drug War, over 400,000 people, including many children, have been displaced by the bombings in Marawi and ongoing martial law and heavy militarization in Mindanao. Duterte has also threatened to bomb schools for indigenous youth, accusing them of being rebel schools, while they are only being taught how to protect and sustain their lands.

Threatened by any form of criticism, Duterte has also cracked down on activists and community leaders through political killings and illegal arrests -- including the arrest and imprisonment of Myles Albasin, the secretary general of youth organization Anakbayan Cebu. 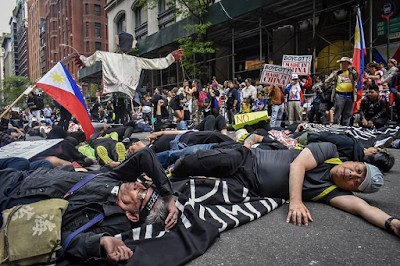 As Filipino youth and students in the United States, we have an important role to play in fighting dictatorship.  We are inspired by the young Filipino activists in the U.S. during the 1970s and 1980s who took to the streets and protested the Marcos dictatorship and contributed to his ousting.  We see that our motherland is now under another dictatorship that we must resist.

Kabataan Alliance calls upon other Filipino youth in the United States to take part in the fight against tyranny and the killings.  As the inheritors of the future, we must participate in the movement for genuine democracy and uphold human rights in the Philippines.  We must be the change that Duterte has failed to be.

Kabataan Alliance will be joining Malaya Movement’s next action, the People’s State of the Nation Address (SONA ng BAYAN) on July 23, 2018 at 6:00PM outside the Philippine Consulate in NYC.
Posted by News Desk at 18:38