The Critically Acclaimed Verité  Documentary Film Directed by the Award Winning Ramona S. Diaz Takes the Viewer Deep Into the World’s Busiest Maternity Ward in One of the Poorest Neighborhoods in the Philippines. 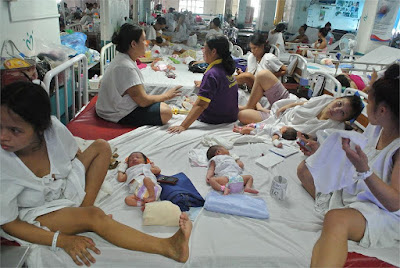 New York - Ramona S. Diaz’s documentary MOTHERLAND -  winner of World Cinema Documentary Special Jury Award for Commanding Vision at Sundance has been set for theatrical release beginning September 8th in New York at the Cinema Village and will open on September 22 in Los Angeles at the Laemmle Monica Film Center, with a national rollout to follow.  The acclaimed film is being released by The Film Collaborative in partnership with CineDiaz and Kidlat Productions.
MOTHERLAND takes us into the heart of the planet’s busiest maternity hospital in one of the world’s poorest and most populous countries: the Philippines. The film’s viewer, like an unseen outsider dropped unobtrusively into the hospital’s stream of activity, passes through hallways, enters rooms and listens in on conversations. At first, the surrounding people are strangers, but as the film continues, it's absorbingly intimate, rendering the women at the heart of the story increasingly familiar. In a hospital that is literally bursting with life, we witness the miracle and wonder of the human condition.
Diaz, a veteran documentarian began filming in the search of a story on reproductive justice, visited the Dr. Jose Fabella Memorial Hospital in Manila, Philippines.  As the busiest maternity ward in the world, it averages 60 births a day—and at its peak, as many as 100 babies within a 24-hour period.  Fabella Hospital is the final safety net for very poor pregnant women, most of whom cannot afford either contraception or the $60 delivery fee.
Immersing the viewer with a fly on the wall cinema verité approach, Diaz shares her experience of finding her story:   “The images I saw at the hospital  - the nurses who did their best to tame the noisy chaos of Emergency Room arrivals, the crowded corridors, the premature births and cramped recovery rooms with double occupancy of single beds – gripped me and wouldn’t let go.  It was soon evident that the story I was looking for, a story about reproductive justice and maternal and women’s rights, unfolded within the hospital wall.”
MOTHERLAND is produced by Ramona S. Diaz and Rey Cuerdo and executive produced by Brillante Mendoza, Sally Jo Fifer, Justine Nagan, and Chris White. The film was lauded by audiences and critics across the globe playing at notable festivals such as Sundance, Berlinale, Docville, Sheffield Doc Fest, The Sydney International Film Festival, Moscow Film Festival and is slated for fall festival screenings in Vienna, Warsaw and Zurich and several other cities.
MOTHERLAND in New York Begins September 8, 2017 at the Cinema Village,  22 E 12th St, New York, NY 10003 phone: (212) 924 3364.
Posted by News Desk at 23:42