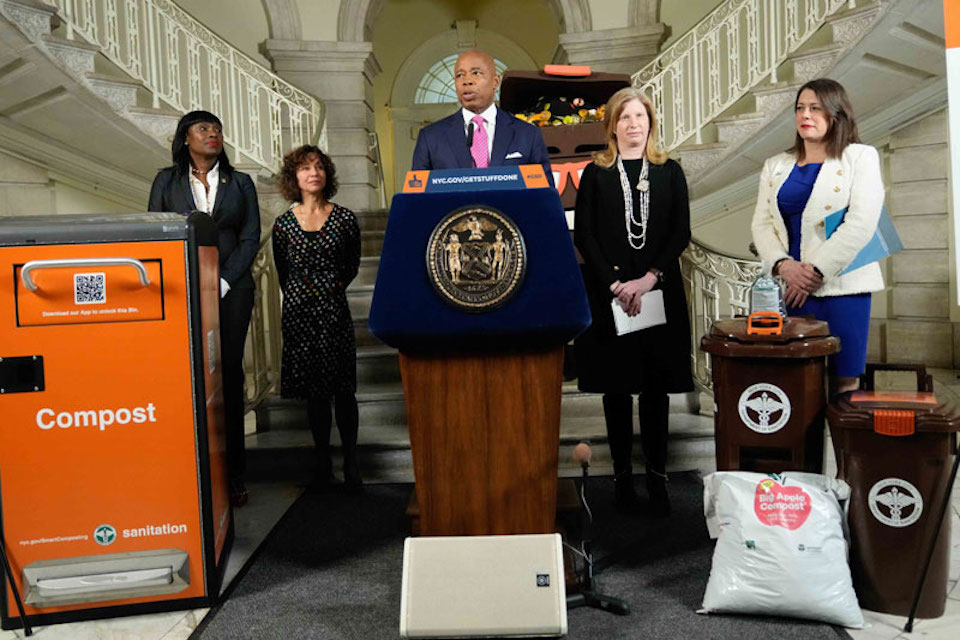 NEW YORK – New York City Mayor Eric Adams and New York City Department of Sanitation (DSNY) Commissioner Jessica Tisch on Wednesday February 1st, announced a roadmap to implement the nation's largest composting program, a long-delayed win for cleanliness and sustainability. After highlighting the program in his State of the City address last week, Mayor Adams laid out details, over the coming 20 months, for weekly collection of compostable material that will become an automatic, guaranteed, free, year-round service for every single resident across all five boroughs. While curbside composting programs have existed in New York City for the last decade, none have ever served more than approximately 40 percent of the city. This will be the first-ever specific plan and commitment to reach 100 percent coverage citywide, providing residents with simple, universal weekly collection of leaf and yard waste, food scraps, and food-soiled paper products. It is also the first program designed as a service for “mass market” use by all New Yorkers.

The Adams administration developed an effective, cost-effective pilot plan for curbside composting that began in Queens on October 3, 2022. This program — designed to be the easiest-to-use, most efficient curbside composting program ever — exceeded expectations in Queens as it diverted three times the material at less than a third of the cost on average per district compared to old programs. This model will now be expanded citywide.

“Today, we are going where no one has gone before. By the end of 2024, every New York City resident will have access to clean, convenient, curbside compost pickup from the Department of Sanitation,” said Mayor Adams. “For more than two decades, past administrations have been working to achieve citywide composting — and today, I’m proud to announce we are getting it done. By reducing the food waste that we put into trash bags, our streets will look better, smell better, and best of all, will be dealing a blow to New York City’s number one enemy: rats.”

“For decades, New York City has been one of the nation’s largest takeout food offenders, sending billions of tons of food out of state, hundreds of miles away to be dumped in landfills,” said Deputy Mayor for Operations Meera Joshi. “Building on the commonsense approach used in the Queens organics pilot, today we are announcing the reversal of this costly and carbon producing activity. Instead of creating more landfill, our food scraps will be separated, contained from rats, and turned into renewable energy, biosolids, and compost.”

Full details on the 12.7 million pounds of compostable material diverted from landfill in the first three months of the Queens pilot program are available on DSNY’s website.

The new program is built on a number of efficiencies that drive costs down, including the use of dual-bin trucks and a right-sizing of the workforce to reduce overtime. The leaf-and-yard-waste-first approach was designed based on an analysis of successful programs in other cities, including Portland, San Francisco, Seattle, and Toronto.

Unlike past composting programs, there will be no sign-up required for this new program. Residents will simply set out anything from their kitchen or their garden in a separate bin on their recycling day and DSNY will pick up those materials to turn them into usable compost or clean, renewable energy. While DSNY will make its own Brown Bins available, this program also includes the flexibility for New Yorkers to use ANY bin of 55 gallons or less with a secure lid.

Service will begin on the following timeline:

As Manhattan will receive service last, Mayor Adams also announced that the borough will receive an additional 150 Smart Composting Bins this spring to help residents separate their compostable material. These orange bins are an example of a successful pilot scaling broadly. From an initial group of 25 in Astoria, Mayor Adams previously announced a plan to place 100 bins across all five boroughs, which, based on popularity, was later expanded to 250, in every part of the city. As of today, those bins have all been installed and are accessible 24 hours per day via a newly-designed app for iOS and Android called NYC Compost. The additional Manhattan bins announced today will bring the total number bins to 400.

New Smart Composting Bin service covers a number of traditionally underserved communities, including Bushwick, Bedford-Stuyvesant, Castle Hill, Harlem, Highbridge, the North Shore of Staten Island, Parkchester, the area around Queensbridge Houses, and Washington Heights. Across these communities, the bins have been greeted by enthusiastic usage and have diverted pristine compostable material from landfill. The additional 150 bins announced today will be placed in central business districts and residential sections of Manhattan.

Today’s announcement additionally comes on the heels of historic investments in other DSNY sustainability efforts by the Adams administration, nearly $31 million in further funding in Fiscal Year 2023 since last April. This funding includes investments in a number of exciting programs — not just curbside composting and the Smart Composting Bins, but a previously-announced expansion of school composting to every New York City public school by next school year, a comprehensive waste characterization study, and expanded funding for community composting.

Finally, today's announcement includes a plan to thank the people of Queens for their role in making curbside composting a success. This spring, all Queens residents will be able to pick up 40-pound bags of New York City compost for use in their yards and gardens. A full schedule of giveback events will be mailed to Queens residents and posted on DSNY’s website. The department will conduct more compost giveback events in every borough as the program proceeds, where the material that residents put out for composting is given back to them the following year as usable soil.